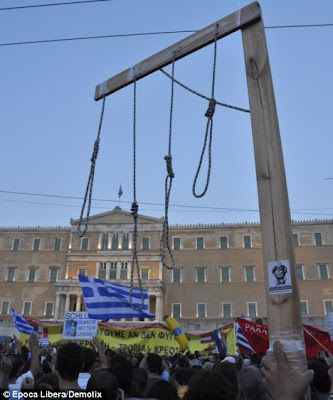 The "sea of people" is real says the Athens-based English language newspaper Ekathimerini, referring to the protests in Syntagma (Constitution) Square (pictured right).

But, as the Greek euro crisis grumbles on, even the Germans are having doubts about whether the latest bail-out will work, with Merkel facing the glimmerings of a rebellion in her own parliament – even if the risks of serious disruption are, at the moment, extremely low.

However, the protests might be that much stronger is the Germans revisited their own history, and in particular when they sought to organise a Greater European economic area, only under German leadership, as opposed to the cross-nation fudge they are having to deal with at the moment.

The template for this plan was actually set out on 22 July 1940 and, while talk of a common European currency had been prevalent at the time, based on the Reichsmark, the report of this date dismissed the idea.

Produced under the chairmanship of Economic Minister Walther Funk, it noted that "theoreticians were always putting forward ideas on currency that had nothing to do with reality". It was "unprofitable for currency matters to be discussed in the abstract, especially by unauthorised persons: this could lead nowhere".

The report then when on to say that, before deciding the question of currency, "we must be clear as to the methods whereby the economy was to be organised". It added:


It was a fantasy to talk at this stage of a unified economy on a European scale, and in the same way that is was harmful to use slogans like "currency and customs union" and expect them to solve all difficulties. A currency or customs union could only be envisaged with a country having a similar standard of life to our own.

Reference was then made specifically to "southeastern Europe", whence it was stated that it "was not at all in our interest to confer on that area a similar standard of life to our own". This, the report said, "could only impair the efficiency of the local economy", then stressing that "we must always be clear what immediate measures were necessary and what might be called for in the long run".

Some years ago, it was a fad amongst a certain brand of eurosceptic to argue that the European Union was a Nazi construct. In fact, as the then contemporary records quite clearly show, the model which currently determines the nature and the structure of the EU was put up as an alternative vision, to compete with the Nazi ideas. Despite its superficial similarities, it is very different.

As the entirely predictable Greek experience shows, the current model cannot work, and is on the brink of collapse. Ironically, had the Nazi model been adopted, the EU would have been much better organised. One wonders if Merkel appreciates that, and whether she is tempted to adopt what might now be called Führernomics.