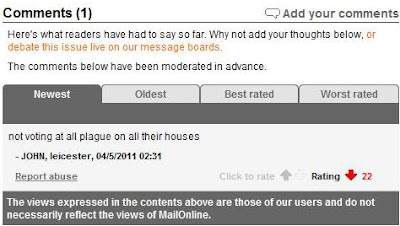 Starkey does a piece on AV in The Daily Mail arguing against Clegg's folly. It elicits one comment (so far), which gets 22 (at the time of writing – increased to 32) adverse ratings. The point of view is not unreasonable, and not voting is a reasonable tactical decision. Why such hostility? Should one despair at Mail readers?

Meanwhile, The Independent notes that the "no" campaign is ahead, and despairingly calls for its readers to "Just say Yes to voting reform". The pic is of a "yes" against a background of a cross. To me, that actually conveys a negative message. But, like Obama, I'm sure they know what they're doing.