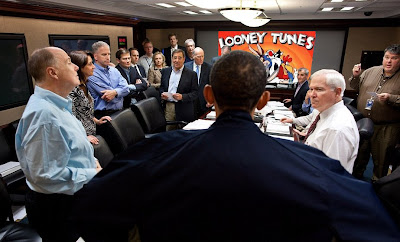 Ending the speculation on what President Obama and his top-level team were really watching, we have now obtained this exclusive picture from Anoneumouse. There is absolutely no question that this is a genuine photoshop.

This is quite unlike the latest statement, supposedly from al Qaeda, which supposedly confirmed their leader Osama Bin Laden is dead. They have supposedly vowed to continue attacking the US warning Americans that their "happiness will turn to sadness".

The statement was posted on jihadist internet forums, and The Daily Fail - which also reported Obama watching the live coverage of the raid – reports that the group has "confirmed" that Bin Laden died in a raid on his compound in Abbottabad.

The news is hoped to take the pressure off President Obama to release the photos of the slain terrorist. And although the Fail admits that the statement's authenticity could not be independently confirmed, it repeats that it was "posted on websites where the group traditionally puts out its messages".

But until we've seen the photoshop of the death certificate, and Tim Montgomerie has confirmed it on Twitter, how can we believe anything - even if Michelle Malkin is helping to clear up the confusion?