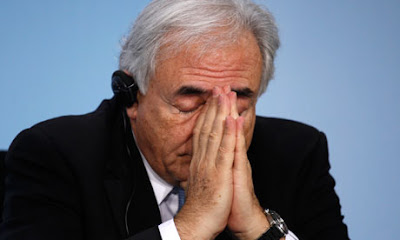 Dominique Strauss-Kahn, head of the International Monetary Fund, and the French left's great hope for president, has been arrested and charged with sexually assaulting and attempting to rape a maid in a New York hotel.

Strauss-Kahn, 62, was taken from the first class cabin of a Paris-bound Air France flight on the tarmac at JFK airport by plainclothes officers before Manhattan police formally arrested him on charges of criminal sexual act, attempted rape and unlawful imprisonment.

That is courtesy of The Guardian, but the story has been noted by one or two other news organs. But I can't think why this is of any interest at all. Just because he has form as a sexual predator, why should this have any effect on a great man's ability to do his important job?

Next thing you know, they will be saying that David Laws shouldn't be hired as a minister. Some people have no sense of proportion.