This is a reposting from last Thursday, deleted by Blogger and not restored. I have taken the opportunity to add to the piece, adding some historical detail on the BBC's amazing audience figures.

Compare and contrast this blog's 7,000 daily hits and one can immediately see the scale of the problem. For the time being, the high and the mighty feel they can ignore minority opinion, as long as the majority is tucked up with the BBC and an expanding audience is talking its daily dose of mind-gel. 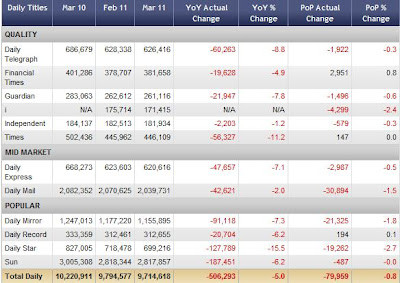 The BBC's "success", however, contrasts sharply with the fate of the national print media, which is showing losses almost across the board. Roughly, over half a million people less read a daily newspaper than did last year, a drop of five percent in readership, bringing total average daily sales to 9.7 million.

The situation for the Sundays is even worse. Here, the year-on-year drop is nearly 700,000, bringing total average daily sales to 8.9 million. That produces a seven percent fall on the year, with The Observer (-10.7) and The Sunday Times (-7.2) particularly badly hit. 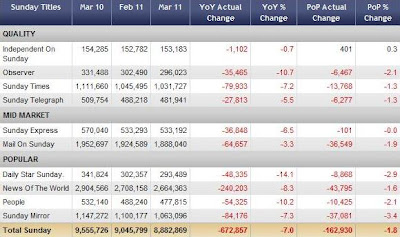 Interestingly, a Radio 4 spokeswoman attributed the rise in its audience to the big, breaking news that dominated the year's start, including the Japanese tsunami and the "Arab spring". That suggests that people are interested in the news, and are actively looking for it. That might point also to one of the reasons why people are deserting newspapers in their droves – a reflection of how unreliable they have become as news providers.

Here, one does not have to be a great genius to observe that, if you market a product under the generic label of a newspaper, it is a reasonably good idea to provide news in your product ... the higher the quality the better. And, given that the market share for the print media is in decline, while other media are prospering, it might also be a good idea to find out why.

So far, though, all we have seen of the newspapers is that they are copying the political model – find out what really ****** people off and give them more of it. 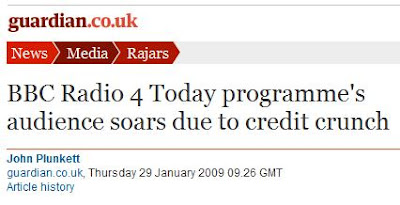 However, we must nevertheless look at the BBC Today Programme figures with a pinch of salt. For the last three months of 2008, it was applauding an average weekly audience of 6.6 million. This was supposedly up nearly half a million on the previous three months and its largest audience since the final three months of 2001.

In August 2010, it was then rejoicing in "a record 6.98 million weekly listeners", which is now 7.03 million listeners, "600,000 up on the previous year". But when you think that, at the start of 2004, it was claiming 6.2 million listeners, and in 3 August 2006 the audience was reported as falling from 6.12 million the previous quarter to 5.87 million (against an all-time low of 5.6 million), these figures are looking like Soviet tractor production statistics. This especially as the system of measurement has undergone profound changes, and as Autonomous Mind indicates, is dubious anyway.

The great advantage for the BBC, however, is that people are paying for it anyway. Therefore, if they have radios, there is some value in turning them on and shouting at them. Unfortunately, that sheer size of the nominal audience gives it traction with the politicians and the clever and sophisticated people who think the figures actually means something. And that is very much part of the problem we have in seeking to change opinion.