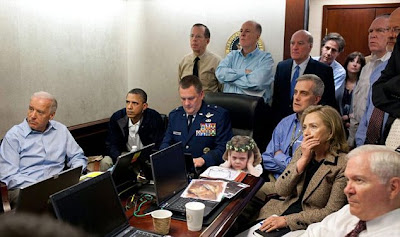 Clinton: Iconic image of White House monitoring operation "may have caught me preventing a cough", reports The Daily Mail, without so much as a blush.

The photo was taken by the White House photographer on Sunday night as Obama and his national security team monitored the assault. Clinton is covering her mouth with her right hand, but she said that the gesture might not convey any special significance. "I am somewhat sheepishly concerned that it was my preventing one of my early spring allergic coughs", she says. "So, it may have no great meaning whatsoever".

The Fluffygraph girlee just carries on as if nothing had ever happened, while the clever and sophisticated blog editor Mr Damian Harris pontificates about "conspiracy theorists".

"The internet played a huge role in spreading false claims about 9/11 in the five years after September 11", he says. "But, if the technology of five years ago was easily adaptable by conspiracy theories, that of 2011 offers infinitely more sophisticated means of making outlandish claims appear as plausible as the BBC evening news".

It is suggested by a commenter that we are entitled to exercise reasonable scepticism, and to ask for a minimum level of evidence to be provided, without being called "conspiracy theorists" by half-arsed journalists whose gullibility extends to believing everything they have been told by the White House ... and finding the BBC evening news "plausible".