Sadder but not wiser 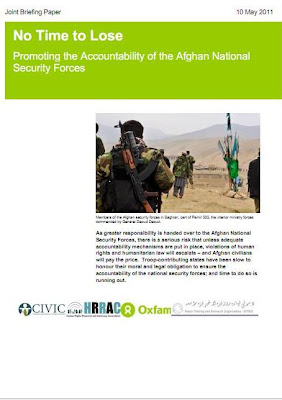 There is some publicity this morning (see Reuters) in the UK for a report claimed to have been produced by Oxfam, on the dire state of the Afghan security forces. It raises "serious concerns" about whether they will be ready to take over from foreign forces by the end of 2014.

The full report, called "No time to lose" is actually a joint briefing paper by multiple agencies. It is not (or does not appear to be) on the Oxfam website, so it is a little hard to find, but can be downloaded from the reliefweb site.

At 37 pages, the report is well worth the read. Fronted by Oxfam, it is the sort of thing the charity is quite good at. If would get a lot more support if it concentrated on this sort of work, instead of frittering away its time and energies on climate change and related nonsense.

Anyhow, of the report itself, you do not have to read between the lines to discover that there is not the slightest prospect of the Afghan security forces being ready to take over from coalition forces, not in 2014 or any time in foreseeable future thereafter.

As a taster, we are told that human rights organisations have documented a series of alleged violations of human rights and humanitarian law on the part of the national security forces. These include night raids carried out without adequate precautions to protect civilians, the recruitment and sexual abuse of children, mistreatment during detention, and the killing and abuse of civilians by local police.

The killer line in this is that the police are "seen by many communities as criminal gangs". And that is nothing new to us and why, in some many communities, the Taliban is seen as a better option. As coalition forces move out and Afghan security forces take over, the Taliban will move in. We will end up with a north-south split, and civil war – within a year of our departure.

Thus underlined is the shabby little charade that we are perpetrating. We will hear from ministers and officials glowing accounts of the progress and capabilities of Afghan security forces. As we get closer to departure, the tempo of these reports will be stepped up, but they will be an amalgam of lies, self-delusion and wishful thinking.

The narrative will not be seriously questioned though. This is about saving face, and justifying the many billions wasted in the benighted country to achieve almost precisely nothing. It is needed to give some meaning to the deaths and injuries suffered by our forces, their efforts and courage.

If despite that they – and we – end up feeling cheated, so be it. Certainly, I am left with the overwhelming sense of the futility of it all. There was all that time, the emotional investment and intellectual effort ... all for what?

We now have the charade of OBL's killing - a very convenient execution - which opens the way for a mass withdrawal of coalition troops. All the fine words and the war aims will now be abandoned. The country will again be left to rot, without any serious resolution, leaving the players no better off in their understanding of the regional stresses and the ways of solving the long-standing problems.

There are more deaths and broken bodies to come, alas, but the sooner we are done with the place the better. We can do no good there any longer - and nor ever could we. We will be sadder, but not wiser, from the experience.