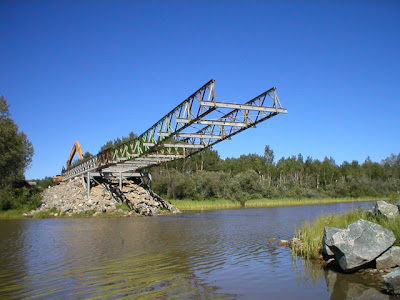 You might have thought that good use might be made of the time suddenly made available from the unexpected demise of blogger, and the enforced inability to blog - with the system having been down for some 18 hours. But the human mind does not work that way.

Released from the tyranny of the blog – albeit temporarily – one simply frets at the absence of chains, and peers anxiously at the bulletins for some sign that one's serfdom might soon resume. In such a fretful condition, one is reduced to a state of complete inertia. Productivity plummets.

Nevertheless, by a supreme act of will, one forces oneself to write, my preferred option being what I call the Bailey Bridge technique. Those who have witnessed the construction of this remarkable piece of British engineering will know instantly what I mean.

Once the bridge is safely in place, the now redundant "nose" is removed and the bridge can be put to use. Such is my writing, where I start pounding the keyboard, almost with random thoughts, until the theme starts to emerge. One continues to the end, and then chops off the opening passages. The piece is now ready for publication.

The ruminations, though, occasionally survive where they serve to lead in gently to complex themes, or where the thinking is not yet clear and the process of writing is itself being used as a way of crystallising the thinking.

Such is the case here, and the themes are the concept of "serfdom" and the voluntary assumption of chains. Bloggers accept the "chains" for a variety of reasons, but primarily because of the perceived benefits – which will vary from person to person. And so it is with another, more onerous impost - our government. We accept the constraints imposed by it because of the perceived benefits, and thereby voluntarily carry the chains and the status of serfdom.

Here, the crucial issue is the idea of our status being voluntary. It can be argued thus, simply because we have within us the power to reject our subservient status, but choose not to exercise it.

Largely, this comes down to the balance of utility. The effort – and exposure to danger – required to liberate us from the chains is too great, compared with the disutility brought about by tolerating the chains. We are comfortable as slaves, and are not disturbed enough by our status to want to change it.

Now, if that is a tenable argument, then it changes completely the perception of politics and political campaigning. Or perhaps it does not. Perhaps it simply reinforces the aphorism that we get the governments we deserve. We deserve them because we are not prepared to make to effort to change them, or the system in which they operate.

Where it does change the perception is in respect of campaigners. Their essence, in relation to the current political system, is to undertake a series of activities which provide entertainment and even employment for the participants, but is calculated never actually to achieve anything of significance.

Into this general category can be shoehorned the entire eurosceptic movement which, in misdiagnosing the problem, and then focusing energy in the wrong direction, ensures that no resolution is ever possible. But, in the trying – and in the guarantee of continuous failure - endless activity is required. By this means, for the fortunate few, lucrative employment is assured.

The corollary, of course, is that if such campaigners ever came across anything that had some prospect of working, they would shun it. A strategy that promised to resolve the problem would be seen as a far greater danger than the problem itself, threatening to bring the gravy train to a juddering halt.

So it is, methinks, with the formalised eurosceptic campaign under the UKIP banner. It is not so much that it has been ineffective. Rather, as structured, failure is inevitable and, within the current framing, nothing done can ever succeed.

The reason for this is actually quite straightforward – once one realises the enormity of it. Simply, the European Union is not the problem which eurosceptics would have us believe. Our membership, and the trials that attend upon it, are symptoms of a larger problem. That larger problem resides with our elites and political masters here at home. The enemy is not Brussels. The enemy is within.

Clearly, to deal with the true enemy requires a different focus, and a strategy wholly different to anything that has so far been associated with the eurosceptic movement. And that very fact underlines the propensity to fail. Thus, the last place to look for ideas to resolve our problems is within the eurosceptic movement. It is like asking the Jesuits for ideas on how to abolish the Catholic Church.

Sadly, though, change is not going to be imminent. For all their protests, most of the slaves are comfortable with their chains, and will not seek to remove them. They may cry for the occasional tub of salve, to ease the chaffing, but that is as far as it goes. The front organisations that exist, ostensibly to address our concerns, have far too much to lose by actually succeeding in what they were set up to do.