It's started. Then there is this from Reuters, and even this. I told you this would happen. This is the exit ticket, which is why no Western government (or any other, if they have any sense) is going to question the Obama version.

Meanwhile, we are told that video footage of Osama bin Ladenn supposedly shot in the Abbottabad premises, has been released by the Pentagon. Described as "home videos", it is claimed to be amongst the material seized following the raid by US troops last week. 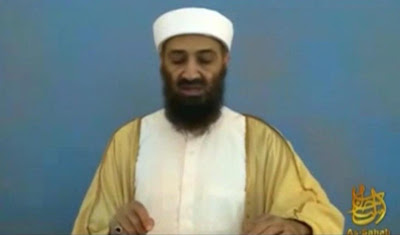 There are five sequences – available on the BBC site, and the first (above) is very similar to the Bin Laden clip in the as Sahab video released on 6 September 2007, and is obviously material for broadcast, with the producer's identifier on it. However, it is not exactly the same as the clip actually broadcast. In this US-captured version, the figure has its gold-coloured gown open. 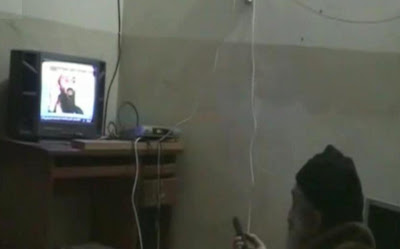 The second shows a grey-beard, watching old news clips of Bin Laden. He is wrapped in what appears to be a blanket and is wearing what seems to be a black woollen hat. He is operating a remote TV control. If this is Bin Laden he looks very much older than anything else we have seen previously and it would be interesting trying to match that face with known photographs, using recognition technology - or even the Mk1 eyeball. 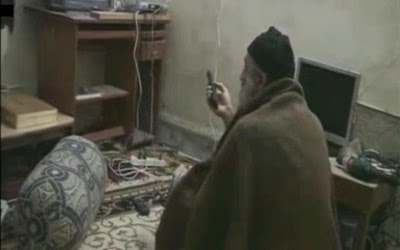 There is some background in this sequence, and as the camera sweeps down, we see a clutter of wiring and equipment (above) and also what appears to be a computer monitor. The window appears to have a blackout curtain, and the bare-painted walls do not give us any recognisable clues as to location. From the picture, the man himself does not look particularly recognisable.

In the third, fourth and fifth sequences, we appear to be back to a younger man, looking very similar to the images in the 2007 sequence. A plyboard sheet and a wrinkled curtain are the respective backdrops, so there are no clues that we can recognise as to location - in any case, they may have been taken 3-4 years ago.