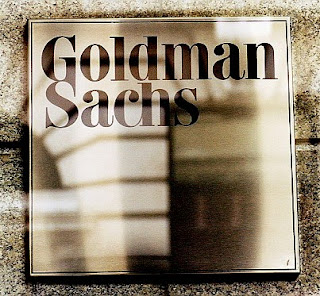 We can't do everything on this blog (I still write "we", even though Szamuely has departed to higher realms – the amount of help I get behind the scenes truly makes this a team blog). The territory is too vast to do other than nod vaguely in the direction of some subjects.

One of those is the advanced kleptocracy in the US banking system, itself the subject of much theorising and declamation. But the stakes have been raised with the publication of a Senate subcommittee report which fingers Goldman Sachs executives like Lloyd Blankfein and Daniel Sparks, calling them out as thieves and liars on a colossal scale.

The magazine Rolling Stone (the very same which outed Gen. McChrystal - and which produced this piece on Goldman Sachs from the same author) has no doubts about the importance of the report, and the impact (so far) of the lack of any enforcement action. It declares:


This isn't just a matter of a few seedy guys stealing a few bucks. This is America: Corporate stealing is practically the national pastime, and Goldman Sachs is far from the only company to get away with doing it. But the prominence of this bank and the high-profile nature of its confrontation with a powerful Senate committee makes (sic) this a political story as well. If the Justice Department fails to give the American people a chance to judge this case - if Goldman skates without so much as a trial - it will confirm once and for all the embarrassing truth: that the law in America is subjective, and crime is defined not by what you did, but by who you are.

I have no means of judging quite how sound, or otherwise, that conclusion might be. I haven't done the background work, nor read the report nor followed the hearings. Nor can I – there simply isn't enough time in the day. What one observes, however, is that the report is having a visible effect in dragging down the reputation of the bank.

There is also a wider effect, precisely the issue which the Rolling Stone article addresses – the corrosive perception of a divided society, the split between as "us" and "them", with one rule us and another for them.

It is my view that, more than anything, this perception is beginning to dominate society. It is not the daily fare of pub talk – not that people talk so much in pubs these days ... the beer is too damn expensive, you can't smoke there any more, and you can't hear yourself anyway as the Sky TV is too loud. But the perception is there – and pops up in a myriad of ways. It is the same perception that drives the antagonism on immigration, on MPs' expenses - such as the Laws case, as Cranmer points out - on bankers' bonuses, "fat-cat" salaries and the rest.

In the United States, there is some small indication that the net is closing, with the recent conviction of the hedge fund owner Raj Rajaratnam for insider trading, after Rajat Gupta, a former board member of Goldman Sachs and chairman of management consultancy McKinsey, tipped Rajaratnam off to a $5bn (£3bn) investment by Warren Buffett at the height of the financial crisis.

But what may come back to haunt Corporate America – with strong resonance this side of the Atlantic - are the words of assistant prosecutor Reed Brodsky in his summation: "The defendant knew the rules, but he did not care", he said. "Cheating became part of his business model".

The elites can get away with their cheating for a long time – they are clever, sophisticated people and can bamboozle us lesser mortals. But, eventually, when they get too careless and too arrogant, their sins catch up with them. Then the reckoning comes. The Anglo Saxon in us will tolerate many things, too many things ... but not this.