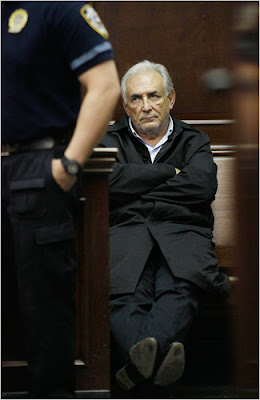 The Kermits are getting seriously wound up about one of their own – one of their élite - being treated like a common criminal. And to explain it all, the New York Times enlists Max Gallo, a prominent historian and commentator.

Says Gallo, "It’s the first time in the history of France that a top-level figure is treated like a common criminal whose guilt is already established". He adds: "But it also manifests an egalitarianism in the American justice system that surprises us in France".

Nevertheless, Gallo poses the question on many lips: "Was it really necessary to do that?" The images struck several commentators as being more akin to scenes from American television crime dramas – dubbed versions enjoy tremendous popularity in France, including "C.S.I. ", known as "Les Experts", and "Law and Order", known as "New York Police Judiciaire" – than from French life.

"It was images from Greek tragedy mixed with those of American TV series", the centrist politician François Bayrou said at a press conference. "Everyone who has seen these images has had their throat tighten, they were so arresting and confounding. It's the destiny of a man that is toppling, with very important consequences for himself, his party, his country".

In truth, if the man is actually innocent, then what he has been through over the last few days is unconscionable, barbaric even. One can quite understand why the finer sensibilities of the Kermits might be offended.

But, on the other hand, he is one of "them". Whether he is guilty or not does not really matter. As a representative of "them", the ritual public humiliation and the suffering of DSK serves a greater purpose. It is a reminder of what we would like to do to them all – would do to them all – given a chance.

Just a few days ago, I republished an example of what a crowd could do when things turn really ugly. Over the last couple of days, we've seen a restrained example of institutional abuse of the élites. Finding DSK guilty will now be just a bonus. The pictures have already have sent their message – and, barbaric or not, our spirits soared when we saw them. And in minds of millions sprang only one further thought: "give us more"!