From one to another 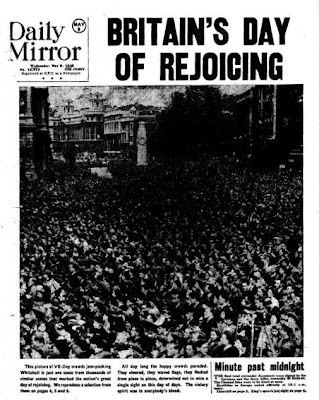 While the pantywaist wuzzies of the coalition are tormenting themselves over whether to fly their masters' flag from public buildings (for the brief period left, when they still have a choice), 66 years ago, real men and real women had been celebrating the end of the war in Europe – with still the Japs to beat.

Officially, the war ended at one minute past midnight, making this the proper VE day, even if the tradition in England is to celebrate the day before – hence the newspapers headlines. But this day has now been sequestered by the "colleagues" as their "Europe Day", celebrating the myth of Robert Schuman presenting "his" proposal on 9 May 1950 for the creation of the Iron and Steel Community and the start of what was to become the European Union.

It wasn't his proposal, of course. It had been devised and written up by Jean Monnet, who in classic style had used someone to front it. In this case, Schuman served his purpose, and was rescued from what otherwise would have been total obscurity. Thus, like most things to do with the EU, even its founding day celebrations are based on a lie. And, in choosing 9 May, the "colleagues" simply mark the transition from one form of tyranny to another.

Yet, instead of working to get us out, all the pantywaists can do is concern themselves with whether to fly the flag of subjugation. That says rather a lot about them. The cowards will roll over and do their masters' bidding, but don't have the guts to admit where their true loyalties lie.

But it was only going to be a matter of time before some fool hack decided that not daring to show the ring of stars was "eurosceptic". It really is true ... these people haven't got any brains.