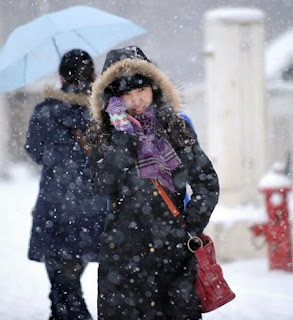 It isn't only the UK, Europe in general and the USA which has been hit by accumulations of global warming. Having been hit just before Christmas - the earliest snow in 13 years - the white stuff is back again with a vengeance. this year

China Daily reports that motorways have been closed off, flights delayed and bus services disrupted. An army of 960 workers with 193 snow-clearing vehicles had been working for more than 12 hours to ensure traffic in the city's main roads and 2,175 tons of "snow-thawing agents" had been used on roads.

It is, we are told, the second snowfall in the three-day New Year holiday, and the temperature is set to plummet by 7 to 8 degrees to minus 16°C in the next three days. This will be the lowest since 1980s. And such is the extent of the snow that even the BBC was moved to remark that "Beijing has suffered heavier snowfalls than usual this winter."

Meanwhile, The Times of India is telling its readers: "Climate change far worse than thought before", despite cold weather and dense fog having caused more than 30 deaths in northern India over past 24 hours. Even Delhi is suffering from unusual cold, with dense fog conditions playing havoc, bringing rail and air traffic to a standstill.

One assumes, though, that the multi-million dollar residence at 160 Golf Links has central heating so, once the servants have turned it on, Dr R K Pachauri will not be unduly discomforted.