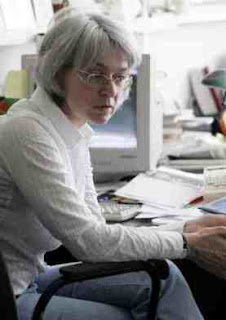 The trial of three men accused of being involved in the murder of the Russian journalist Anna Politkovskaya has come to an end. All three have been acquitted by the military court in a move that is somewhat embarrassing to the Russian authorities.

The man who is supposed to have done the actual killing, Rustam Makhmudov, was not on trial as he is supposed to be hiding somewhere in Western Europe. Neither was anybody who was accused of organizing or commissioning the killing.

Makhmudov's two brothers, Dzhabrail and Ibragim, were accused of involvement and found not guilty to their and their supporers' understandably delight. Others found not guilty were former police officer Sergei Khadzhikurbanov and former FSB officer Pavel Ryaguzov who had been up on an extortion charge related to the case.

The prosecutors intend to appeal but it is hard to see what that will achieve, as the evidence of involvement seems to be quite weak and no principal has been arrested or charged.

According to an understandably more detailed report on the BBC Russian Service, Politkovskaya's family and colleagues on the Novaya Gazeta, another of whose journalists was murdered last month are certain that those acquitted today did have some involvement in the murder but nobody is too optimistic that the case will ever be solved.

It might be a good idea to remind our own hacks of this and other cases of Russian journalists being killed, attacked, imprisoned, beaten up or having their homes trashed whenever they complain about their difficulties.