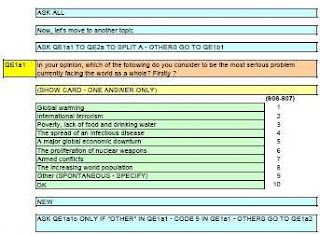 How do you fabricate a headline like: "Most Europeans 'very concerned' by climate change"? – this one delivered courtesy of the news agency AFP yesterday.

Well, it's easier than you think. Firstly, you throw a tidy sum of money at some perfectly respectable and professional opinion pollsters and you set them to work interviewing 30,170 citizens in the 27 Member States of the European Union – in this case between 25 March and 4 May 2008.

For each of the selected responders, you tell the interviewer to present them with a printed card (illustrated top left) listing global problems which you have selected, with "global warming" as the top item, conveniently numbered #1. Crucially, you do not include choices such as "energy security" or any variation of that theme, nor even more arcane things like the breakdown of the Doha round.

Then, you have each respondent, while they gaze at the card so conveniently provided, answer the question: "In your opinion, which of the following do you consider to be the most serious problem currently facing the world as a whole?" Note: you do not invite them to volunteer a choice, and you restrict answers to problems "currently facing the world as a whole", thus excluding local and national concerns. Your mother could be dying in a crap hospital but "health service" would not be admissible.

So, what do you think the answer will be?

Yet, even with a totally bogus set-up like that, the best the polling companies could come up with was that "global warming" ranked second. It gained a score of 62 percent across the whole of the EU, compared with "poverty, the lack of food and drinking water" which ranked a clear first for 68 percent of the respondents.

Nevertheless, you publish the results in a Eurobarometer report with a press release that says global warming was deemed by "Europeans" as "among the most serious problems".

You could, of course, have headlined: "poverty, lack of food and drinking water more important than climate change," but that does not fit your narrative. Instead, you embellish your global warming results by stating, "At the country level, absolute majorities in nearly all countries regard global warming/climate change as a serious problem." And you let the media do the rest.

Interestingly, the British proved relatively resistant to this game, 60 percent of them putting "international terrorism" at the top of their global concerns. Global warming only got 57 percent, followed by "poverty, etc.," at 53 percent.

Having preconditioned the responses, however, the interviewers went on to ask: "And how serious a problem do you think global warming is at this moment?" EU-wide, they suckered 76 percent into saying it was "serious", 16 percent "fairly serious". Only seven percent said it was "not a serious problem". Given, however, that most had already admitted that it was a "serious problem" in the first question, how could they say it was not serious in the second?

Thus, even in the UK, 69 percent said it was a "serious" problem, and 23 percent conceded "fairly serious". But a full 14 percent answered that it was "not a serious problem", the highest score in the whole of the EU. Yet, the British also scored as one of the highest for considering themselves well informed, at 72 percent compared with the leader, Sweden, at 85 percent and the EU average of 56 percent.

This gives the UK a clear majority of refusniks compared with the EU average of 44 percent who would be prepared to pay more and the 30 percent who were not.

Basically, therefore, even in this skewed survey, where people were manoeuvred into giving false prominence to global warming, the majority of Brits said they were not prepared to pay more in energy bills. Even those who said they would pay more were only offering a fraction of what is being demanded.

Bearing in mind that the 35 percent hike in gas and electricity bills came after this survey was completed, neither the EU nor the British government can claim that the British are prepared to pay through the nose for the global warming obsession.

Needless to say, the "colleagues" will now push the mantra that "Most Europeans [are] 'very concerned' by climate change" and use it to convince themselves that their policies have popular support. Those who are watching the small print, however, may think differently, and see this survey for what it is – part of the propaganda game.