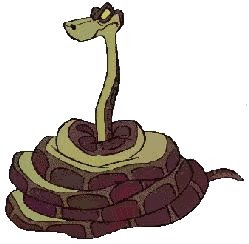 Whenever I hear politicians talk about trust I think of that wonderful scene in the Disney "Jungle Book" where Kaa, the python, whom I found infinitely more frightening in both the book and the film than Shere Khan, sings to the monkeys:

Trust in me, just in me
Shut your eyes and trust in me
You can sleep safe and sound
Knowing I am around

I thought that during that pathetic episode of Tony Blair and Formula One, when the man actually said in an interview that people could trust him as he was a regular kinda guy. Anything more like a snake-oil salesman's talk I have yet to hear.

Then again, the Boy-King of the Conservative Party has come close. As the Toryboy blog tells us, Cameron has been speaking to Welsh Conservatives on St David’s Day about the need to restore trust in politics and politicians.

My colleague has already written about the subject of trust in connection with the well-meaning letter by a number of younger Conservative MPs. For all of that, the subject bears covering again, especially as there is now a speech by the leader himself.

One cannot help wondering about this sudden interest in the word "trust". This government has not been trusted for some time and neither have politicians or anyone else in the political establishment, which includes the political media. To be fair, very many people who say they don't trust the media do nothing but quote the BBC/Channel 4/selected newspapers without once bothering to scrutinize what they saw/read/heard.

Could it be that the Conservative Party is rather belatedly jumping on the bandwagon that was first rolled by Francis Fukuyama in 1995? If so, they are off base. I did not read the book because I was not completely impressed by his magnum opus "The End of History and the Last Man" but as I understand it from comments, Fukuyama's thesis is that in order to move forward societies must be based on the notion of trust whether this is true in every single case or not.

Without going into the details of the subject, it is clear that this is a large and fascinating topic, of particular interest to those of us who support the Anglosphere. (Perhaps I shall have to read it after all.)

The subject cropped up in the Reith Lectures of 2002, given by Professor Onora O’Neill, now Baroness O’Neill of Bengarve. These I did listen to and came away with a feeling of complete bemusement that a lady with such very impressive credentials in philosophy could talk such mush.

As I recall, the lectures (by this time reduced to 30 minutes or so and turned into a travelling circus) consisted mainly of a prolonged whinge about the lack of trust displayed by the public (that's us) towards the various institutions that had always been trusted in the past. Only someone with no knowledge of literature could believe that politicians, educators of various kind, the law or the police were always trusted in the past.

I have no memory of Professor O'Neill once discussing the need for reciprocity in trust and the importance of deserving it.

Cameron, one must admit, has advanced a little beyond that point of view. He seems to accept, though one hears the reluctance in the tone of the speech, that if politicians are to be trusted they must do something to deserve that.

Problem is, he does not seem to have understood why it is they are distrusted. To put it another way, why it is that the whole political process is distrusted to the point when ever more people opt out completely without even pretending that there might be some way of changing things. To be fair to the Boy again, none of the commenters, apart from my colleague, on the posting seem to have grasped the point either. Instead, there is a great deal of rejoicing in how well Cameron has spoken or some criticism on the edges.

One hears a great deal about the lack of trust in politicians because they do not tell the truth. Did they ever? No, as a matter of fact, they did not. Did politicians of the calibre of Gladstone, Salisbury or Churchill tell lies? You bet they did, not least because telling the truth at certain times demoralizes the country beyond recall.

Often politicians tell lies because politics consists of trying to reconcile irreconcilable interests, for instance those of the country as a whole and the constituency a politician represents. Often they tell lies for less respectable reasons, wanting to get re-elected or staying in power being the most obvious ones.

Are politicians venal? You bet. Nothing annoys the public more than watching those drongoes voting themselves ever higher salaries, expenses and other perks, including a very handsome pension, all of which the ever harder pressed taxpayer has to fund.

To those who say we must go on paying MPs ever more because if we pay peanuts we get monkeys, there are three responses. First of all, when you add up handsome salary, handsome expenses and no supervision we are not talking peanuts; secondly, the number of people who want to be MPs is absolutely enormous, so clearly the conditions are attractive; and thirdly, I’d rather have a bunch of monkeys there than the useless misfits we have now. 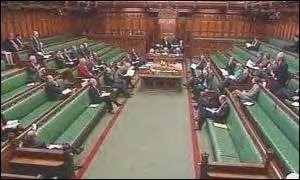 Which brings me to the main point not made either by the signatories of that letter or the commenters on the Toryboy blog or by David Cameron himself. You can mess around with salaries, expenses, telling the truth in Budget speeches (that’ll be the day) and getting rid of spin doctors (ditto).

The truth, the harsh, unvarnished truth is that there is no point to the House of Commons or to MPs.

Let us go through it systematically. The House of Commons is supposed to legislate and hold the Executive to account. It never does the latter. The only body within the British constitutional structure that still does it to an extent is the unpaid House of Lords and, with the help of the House of Commons, it has been emasculated and is to be destroyed completely.

Legislation no longer happens in the Commons. Between seventy and eighty per cent of it comes from Brussels, often bypassing Parliament completely. Even if it does hit Parliament, it cannot be rejected. Scrutiny, even if there were time to do it thoroughly, without the right of rejection or amendment is not legislation. It is akin to rearranging those famous deckchairs on the Titanic.

In other words, MPs have abandoned all their duties and, while most people probably do not know the details of the EU or suchlike matters there is a widespread if unfocused understanding that there is no point in voting as that changes nothing. This is not because they are all the same, though that is true as well, but because they, the politicians, are not in a position to change anything and when they tell us otherwise, they are lying on a scale no politician has lied before.

This situation means that there is no trust in the political process either. What is the point of those constitutional structures, worked out over the centuries, if none of them function in any acceptable way?

The other side of the coin is that in the little that has been left to the politicians to deal with, they micromanage. No part of our lives is safe from their grubby little fingers: not education, not behaviour, not whether we need plastic carrier bags or not.

For a lot of people politics begins at home or as near to home as possible. I don’t mean local government, which is often more corrupt than the national one, but local institutions that people should run themselves – charities, organizations, schools, playgroups etc.

It has become impossible to keep politicians, pettifogging regulators and legislators to keep out of any of this. So, people who might contribute a great deal to society by involving themselves in those organizations, do not do so. They opt out and concentrate on their own and their families' lives, while the bureaucrats produce ever more forms and MPs, having voluntarily surrendered all their real powers, fill up their time by passing more and more fiddling legislation that takes up other people's time, money and energy.

No, we do not trust politics or politicians, Mr Cameron and ladies and gentlemen of the Conservative Party. Nor shall we until you at least show some understanding of where the problem lies. Oh and stop fiddling while Rome burns. It is not an edifying sight.