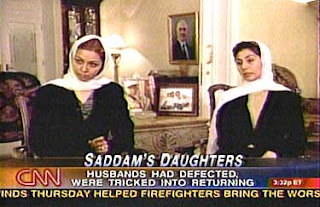 Will Saddam Hussein become a martyr to many millions of Arabs and other Muslims? Somehow, I do not think so. There is a great deal of artificial indignation being whipped up, though, for some reason, the process started a couple of days after the actual execution and where there are cameras and news reporters, there will be crowds and displays of public grief and emotion. But, for all of that, do that many people outside the anti-American western main stream media really care?

One such rather ridiculous display is described by AllahPundit. It is the daughter of the old tyrant, Raghad, joining a sit-in in Amman and generally “leading” the various protests and lamentations. Well, she is his daughter, is she not? Is it not understandable that she should be grief-stricken? Hmm, I am not so sure and neither is AllahPundit, who, frankly, thinks that there is something wrong with the woman.

Then they were enticed back to Iraq with promises of full forgiveness. Why they believed it, remains a mystery but return they did. They were met at the border by that delightful creature Uday Hussein who whisked off his sisters with an almost immediate double divorce announced. Who says Muslim women cannot get rapidly divorced from their husbands?

It looks like Raghad and all those grief-stricken protesters may have forgotten what happened to the two brothers after they had been interrogated and released.

What happened next is a matter of legend in Iraq. … dozens of security officers … surrounded the home at al-Sayidiyah. Another security team brought a busload of Hussein Kamel’s relatives and friends to a nearby knoll, from which they would be forced to watch the terrible events that were about to unfold. At dawn, a fierce gun battle broke out. Hussein Kamel and his family tried to defend themselves … most inside were dead, including Hussein Kamel’s brother, his father, his sister, his nephew, and several bodyguards. The attackers stormed the mansion dragged the wounded Hussein Kamel outside, and executed him in front of his relatives. It is rumored that they were told: “Let this be a lesson that no traitors will be allowed to live”.

Did the invasion by the coalition forces wipe out this and other stories of this kind? Did Halabja not happen because it was the Americans who had found and arrested Saddam Hussein?

David Pryce-Jones links Saddam’s trial and execution with those of Adolf Eichmann. There is little to be added to that. Read the whole posting.

To those who didn’t like justice I say that his death means life to many.

Executing the dictator renews the hopes of not only Iraqis but also of other oppressed peoples in the world in having a better future where they enjoy freedom. It's time for other tyrants to learn from this lesson and realize that a similar fate is on the way if they refuse to change.

Yes, it was the people though their elected government who put Saddam on trial and who says otherwise should go back and learn about how Saddam humiliated, murdered and tortured Iraqis and plundered their fortunes in his stupid adventures.

Are we to understand from all those protesting starting with the Daily Telegraph and ending with whatever left-wing media outlet one would like to name, not forgetting the egredious John Prescott, that the Americans should not have handed Saddam over for the verdict arrived at by the Iraqi court appointed by the elected Iraqi government to be carried out? Surely not.