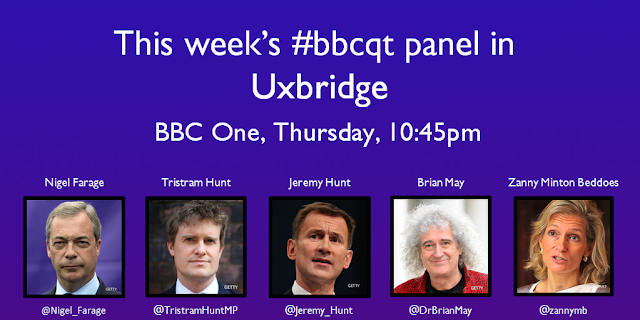 Watching BBC Question Time, we get the distinct impression that Farage will help Ukip limp along until September while it gets its act together for some kind of leadership contest, in which Farage will probably let the other contenders make fools of themselves and resume his role, given that the gang of clowns he appointed to senior roles could not possibly replace him. That was always a possibility.

One thing we saw was Farage having a pretty easy ride of it. The thing is, Farage is now the useful idiot the establishment needs. He will make the worst possible case for Brexit, using decades old arguments, which are now beyond relevance, dragging immigration into the debate - which is what lost winnable seats for Ukip in the general election.

He trots out the same old baloney about a European army and and "taking back control of our borders", and it's precisely the sort of easy hit arguments the europhiles are prepared to face down, and Farage will walk right into it.

In many respects, the political establishment couldn't ask for a better opponent. He has been anointed by the BBC as the official spokesman for the Brexit campaign even though he has precisely no mandate to do that. For those eurosceptics like me who want this to be about bigger issues of governance, democracy, sovereignty and human rights reform, Farage is the very worst possible spokesman.

Never will you hear it said that free movement of people and trade is the benefit of the single market and the EEA, not the EU. Nobody will even make the distinction. Farage won't make this case because he's barely aware of the distinction even as an MEP. As it happens the majority of British MPs and MEP's don't know the difference.

This does raise the question of whether anyone in Ukip would be any better and the answer is categorically not (since they're all mouth-breathing losers), but in any case, the squabbling will continue for sometime within Ukip and that will sadly equate Brexit with Ukip - and will show just how much the campaign is in disarray. When the only other "assets" we have are the likes of Matthew Elliott, Dan Hannan, Bill Cash, John Redwood, Dominic Cummings and Business For Britain, the chances of winning look remote.

None of them will appreciate that the debate has been framed between the status quo and the narrow little Englander vision and they will only speak within those narrow parameters, with perhaps only Hannan preaching a more liberal view but in essence getting all the arguments wrong because he's a shallow individual and impenetrably thick.

One thing is clear, we are not going to get an honest debate about the EU, or even about what the EU is from either side, and ignorance will be considered a virtue. You might well ask why I'm even bothering. Given how bleak it looks today, I really don't know. I guess I'm just not one for going down without a fight, even if my allies are my enemies.
Posted by Pete North at 01:34