Kermits get the cream

France's Rafale has emerged as preferred bidder in a $11 billion contest to supply India with 126 fighters, says Reuters. They have undercut the rival Eurofighter and boosted French hopes of a long-awaited first export contract for its premier combat jet.

Clearly, the bribes aid we've given them hasn't worked out. But why on earth are we giving £1.4 billion in aid to a country that can afford to equip its air force to the tune of $11 billion, and isn't even buying British?

It gets even murkier when one realises that India itself is giving $5 billion in aid to African countries, aimed at expanding trade relations. The Indians are sensible enough to use their aid to get economic leverage … we just dole out money we haven't got, and get nothing in return – except Rajendra Pachauri.

And how droll it is that after Sarkozy sneered at Britain, claiming that "the UK has no industry left", we see a British prime minister claim today that "Britain actually has a higher percentage of industry than France does".

But, says The Boy, "we think that we need to rebalance even further; we want to see a growth in manufacturing, technology and aerospace … ". Sadly, it rather looks as if Sazkozy is doing the rebalancing. 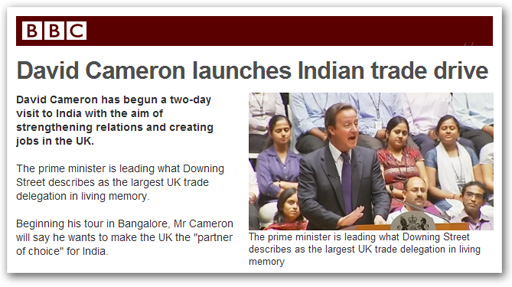 And it was such a pity about The Boy's trade drive. It didn't seem to work too well, did it? The "partner of choice" seems to have moved over to the other side of the Channel - at least as far as the IAF is concerned.

(I don't know why, incidentally, that the video shows Mirage jets as well, but there you go ... it's Euronews.)