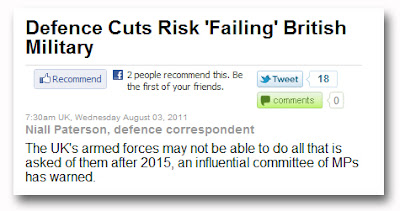 The pull-quote is from Sky News. Other media outlets are on the case. What seems to have escaped the Defence Committee and the media pundits is that for much of the past decade, the military have been unable to deliver. The escapade in Southern Iraq was an egregious military as well as a political failure, and the operation in Afghanistan is following a similar pattern.

What we need to confront it that the British Armed forces have the highest per capita spending of all the forces in the world – three times the spend per person than the US military. And for that, we get serial failures. It would be too much to expect that either the Defence Committee or the present administration could improve our performance with the existing budget – neither have the capability nor understanding so to do.

But at least, under this regime, our failures come cheaper, something which could, with advantage, be replicated elsewhere.