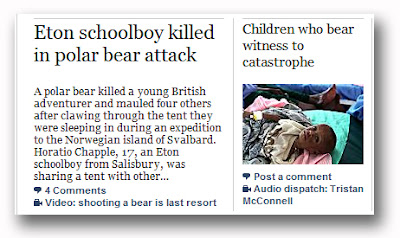 An unfortunate juxtaposition of articles on the paywall Times sets the seal (to coin a phrase) on an incident which should be regarded as tragic, but which is unavoidably comedic. At last, one might say, we have proof the climate change is killing polar bears. The youngsters on the fated expedition, we are told, were in the Norwegian wilderness to study the effects of climate change.

Actually, the reality is even more ironic. Apparently, Norwegian polar experts (the ones not consulted by the BBC) are saying that there are more polar bears because there is an unexpected (to some) increase in sea ice, which has enabled them to travel more easily.

In fact, it has been so unseasonably cold up there that some of the party had already been airlifted out because of frostbite - oh and "sunburn" ... actually burn from snow glare. Furthermore, we are informed, the camp's protective tripwires did not work because they were frozen solid.

Still, one must commend the bear on its good taste in going for an Etonian. We have plenty more if the ursine population is interested, and a particularly plump, if sockless, old Etonian, who could prove a tasty morsel.

However, it does not stop there. Pravda, in a throwback almost to Cold War rhetoric, is most definitely not amused. The British NATO contingent, it complains, wastes up to $100,000 of their taxpayers' money per aircraft per hour, every single day since February 17, bombing kids, strafing water supplies, murdering babies, targeting civilian structures, in Libya.

And now in Norway a polar bear has been shot because of a British student. No mention of Chechnya there, I see - but at least the emphasis is largely correct. Not so the BBC, which is matching Pravda with its with its own brand of rhetoric, asserting via a stooge scientist that it is the absence of ice (i.e., global warming) which brings polar bears into greater contact with man.

Not for the BBC is there any suggestion that faux studies of "global warming" also brings innocent 17-year-old Etonians into contact with polar bears. Nevertheless, there can be no doubt as to the BBC's stance ... climate change kills the chillun - a not so cold war, one assumes. 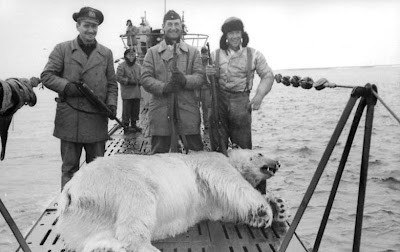 If the ice has truly disappeared, though, the way to prevent succulent Etonians being targeted by random ursines is simple - send a U-boat. The Germans used to know how to deal with these things, witness this rare happy shot (to coin another phrase) taken in 1943. Little did they know that they were doing their bit to make the world safe for Etonians.

Better polar bears than sinking ships, one might think. Doubtless, the BBC would prefer the latter. The Canadians seem to have a better way of dealing with these things, although the carbon footprint is so high that saving bears must surely be killing them?

Despite that, none of the greenies seem to be particularly interested in recycling, as a suggestion in the Daily Mail comments got short shrift. True, sending the offending bear's pelt as a souvenir to the grieving parents might be a little tactless, but it is green, and since when have the greenies ever worried about tact? Killing kiddies is funny, doncha know. Anyhow, that comment has been removed, together with all the rest.

What no one is asking, though, is whether this particular bear was sponsored by the WWF. The idea that this environmental "charity" had been indirectly responsible for the death is simply too much to bear, one supposes.

And, with that, North junior has descended upon the EU Referendum household for the weekend, so we are sacrificing some of our carbon ration to have a look at the North Sea today. We are assured that the polar bears have not yet reached this far south, but you never know ... I may be gone some time. Bear with me.