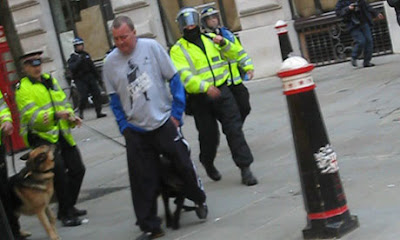 PC Simon Harwood, a member of the Metropolitan Police's Territorial Support Group, used "excessive and unreasonable force" against Ian Tomlinson at the G20 protests in London, a jury has decided.

To reach an unlawful killing conclusion, says The Guardian, the jury were required to have been satisfied to a higher burden of proof than the other possible verdicts, which could have been reached "on the balance of probabilities". They had to be convinced "beyond reasonable doubt", the same threshold used in criminal trials.

Now, we are told, the director of public prosecutions, Keir Starmer, who decided in July last year not to prosecute Harwood for manslaughter, will now be under intense pressure to reverse that decision. My guess is that – as always – he will try to tough it out, and avoid a prosecution.

Therein does lie the core of the problem – we are becoming an "us and them" society, where there is one rule for them and another for us. The police, on the one hand, get away with murder, while on the other hand punish the public for minor infractions of the law.

Actually, it would be more accurate to say we are returning to an "us and them" society – we never really left it. In the website to which I linked yesterday, there was a traditional English rhyme:

Thus, t'was ever thus – except that, briefly, after the War, there was some attempt to seek a more egalitarian society, which largely got bogged down in Labour's idea of socialism. But now, seventy years on, there is not even the pretence. This a society where the police beat people up on the streets and, even though caught in the act, the DPP decides that no further action is necessary.

We can draw our own conclusions from that, but they are not happy ones. Raedwald makes some very pertinent observations in this respect, and underlines the crucial point that this is a system failure. This is not just a rogue copper ... it is a rogue system.