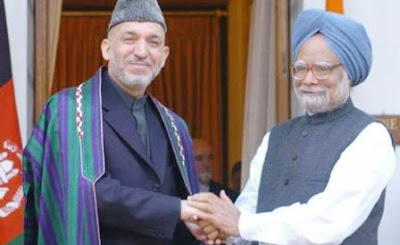 It was earlier this year that the vexed issue of aid to India briefly hit the news, with the commitment of £280m a year from the British budget to a country which spends £20bn a year on defence and has an active space programme.

But what was not mentioned at the time was that, while we have committed over £1 billion in aid to this country, India itself is a major aid donor, in particular to Afghanistan. And, with the announcement from Indian prime minister Manmohan Singh to the Afghan parliament that it is committing an additional $500 million for various developmental projects, this now brings total Indian aid to Afghanistan to over $2 billion.

In effect, what is happening is that roughly the equivalent in cash value of our aid to India is being turned round and being used to bankroll the corrupt Karzai, regime, effectively using our money to buy Indian influence in the region.

It says something also of the poverty of US foreign policy that the United States have been amongst the first countries to applaud this move, even though the motives of India are far from benign. The strategic objective of India in this country is primarily to destabilise Pakistan, creating a second front to the west, and thus keeping Pakistani attention away from the Indo-Pak border, and from the Kashmir hotspot.

The support of India for the Karzai regime also bolsters the traditional enmity between Afghanistan and Pakistan, increasing tensions in the region and rendering stability even less likely, as Pakistan retaliates by supporting its own proxies, fuelling the local insurgencies.

The situation is not made any better by William Hague's recent announcement of a "substantial expansion" of Britain's diplomatic representation in India. Add to that the tension over the Bin Laden raid and Pakistan's already well-matured paranoia can only be intensified.

Not a few commentators, such as this, are questioning whether Manmohan Singh's visit to Afghanistan at this time was altogether wise, but questions also need to be asked about the emphasis of British policy in the region, which is showing clear favouritism to India.

Given that we still have troops committed to Afghanistan and in harm's way, and that we regard Pakistan as our strategic partner in the war against terror, one wonders whether HMG really understand the policy implications of its support for India, the message it is sending to the region and the effects of its continued financial aid to India.

It seems more than a little perverse that the British government should be robbing its taxpayer "Peter" to finance the Indian "Paul" to promote its own foreign policy initiatives in a region where we have troops at risk, and the Indian actions are very far from being in the British interest.

But then, the Cleggeron policy wonks will have thought of all that, and will have their own reasons for pursuing the current line. One supposes that they know what they are doing.