The road to Hell 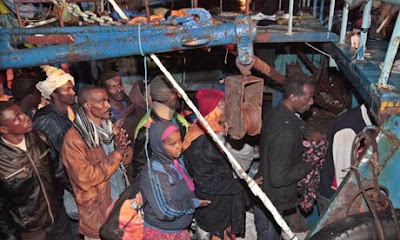 The Guardian has for some days been running stories on how boats full of migrants on their way to European destinations have been ignored by Nato warships, the occupants being left to die. The latest of such alleges that the crew of a naval vessel took photographs of African migrants begging for help from a broken-down boat adrift on the Mediterranean but refused to offer any assistance.

The account, given to the UN high commissioner for refugees (UNHCR) by an Ethiopian survivor now in a Tunisian camp, adds new details that make clear western military forces off the Libyan coast were well aware of the plight of the migrants they failed to help.

"We passed by a military big boat", one of the survivors, an ethnic Oromo, told a UNHCR official. "We wanted to go with them as it looked safer than staying in our boat, but they refused [to allow us to board] their boat. We also saw a military helicopter flying above us".

In this harrowing tale, the refugees' boat set off from Libya on 25 March carrying 50 men, 20 women and two small children. When the boat washed up back on the Libyan coast only 11 were left alive after 15 days at sea without food or drinkable water. A woman survivor died on the beach and the remaining 10 men were arrested by the Libyan authorities and put in jail, where another of the men died.

What is not being admitted – or even properly acknowledged – is that Gaddafi is quite deliberately using the migrant "card" as a weapon of war, with reports of Libyan soldiers forcing unwilling "refugees" into unsound vessels at gunpoint. A high proportion of the latest wave do not appear to be north Africans, from the conflict areas, which further suggests that these are people being used as pawns in the increasingly bitter fight between Gaddafi and the coalition.

What this further points to is the unintended consequences of partial intervention, reliant on the use of "hands-off" air power. In the nature of these affairs, the situation requires a full-blown commitment in order to reduce collateral damage and minimise suffering. All this half-hearted approach seems to be doing is prolonging the suffering that it was, with such good intentions, intended to prevent.

But these current episodes of what appear to be "malign neglect" seem to be the worst of all possible worlds. The current instability has opened a gap in the defences, allowing would-be migrants to pour through, only for them then to confront a system which has not the conviction or strength to tell them to stay put and instead must force some cruelly to die in order to send a covert message that it cannot deliver openly.

Whoever it was that said the road to Hell was paved with good intentions knew what he was talking about.