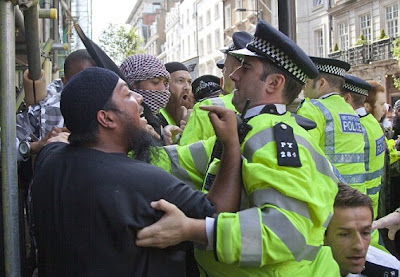 According to The Mail, a Muslim who attended a training camp organised by known extremists, along with the ringleader of the July 7 suicide bombings, was later paid by police to teach officers how to combat terrorism.

Tafazal Mohammad, 46, was described at the inquest into attacks in London as a suspected "terrorist sympathiser" who was twice placed under surveillance by MI5. Yet he received more than £80,000 of taxpayers' money to lecture Scotland Yard counter-terrorism officers, council workers and youth leaders on how best to "engage" with Muslims.

I think for a very much smaller amount of money, I could have told the police how to "engage" with our Muslim fraternity, and have offered them no end of free advice on how to engage with the white community – with which they seem to have lost all contact. It seems as if they are determined to learn that lesson the hard way and, when it is taught to them, I suspect it will cost a great deal more than £80,000.

More to the point, it seems that the police are incapable of learning any lessons, unless it costs a great deal of money. There can be no doubt, though, that the lessons are well needed. This is getting more and more obvious as we see (top) a police response in London last week to a riot by Muslims protesting over the death of Bin Laden. This is just a few blocks from the 7/7 Inquest which had just delivered its verdict to weeping relatives. 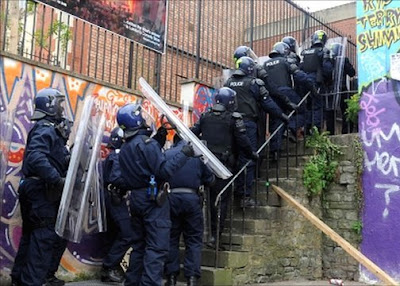 By contrast with these police in normal uniform, we see the police in Bristol last week, as they make a house call on a squat to move a few white kids out of the property. The plods might think we are as stupid as they are and do not notice what is going on, but they would be wrong. They should take note that ordinary people tend to be quicker at learning lessons than corporate dinosaurs.

And as each day passes, we are learning new lessons.