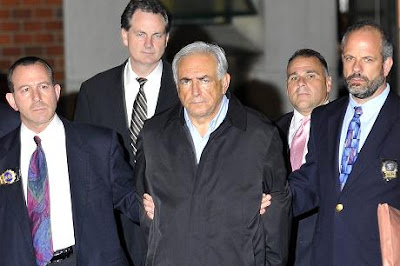 Dominique Strauss-Kahn will appear before a New York court today, to plead on charges related to the sexual assault and attempted rape of a hotel chambermaid. He was reported to be "tired" after having agreed to undergo a forensic examination at the request of prosecutors. You can read a very interesting take on the background from Subrosa, and the latest update is here.

The somewhat underwhelmed New York Post notes that Strauss-Kahn had allegedly "sodomized" the Manhattan hotel maid, reporting him being in a "snit" over the lack of VIP treatment.* He had "proved the height of pompous arrogance yesterday", throwing a fit over a battle on his bail — which left him parked on a wooden bench in an East Harlem station house the whole day.

He had been initially led out of the NYPD's Special Victims Unit at around 11 pm in handcuffs, scowling and red-faced (pictured). Sporting a long navy-blue coat and an open collar, he refused to acknowledge reporters as he was placed in the back of a police car and whisked off to Kings County Hospital in Brooklyn for forensic tests. The NYP sources said he was taken out of the police station after finally agreeing to a medical examination - and only after the police had moved to obtain a warrant to gather potential DNA evidence.

Meanwhile, the IMF and the French government both seem to be throwing "the seducer" off the sledge. He is said to have been in New York on "personal business" and has not claimed diplomatic immunity. His schedule meetings with Merkel on Sunday in Berlin was postponed and meeting of the finance ministers of the EU member states in Brussels today is going ahead without the great man, who was to have been there to represent the IMF.

* The meaning of the word "sodomized" in the US (according to Tim Worstall, who knows about these things and sent me a helpful e-mail) is different from its normally accepted meaning in the UK. As so often with two cultures divided by a single language, the labels on the tins may look the same, but the contents may vary - as does, occasionally, the direction of travel.