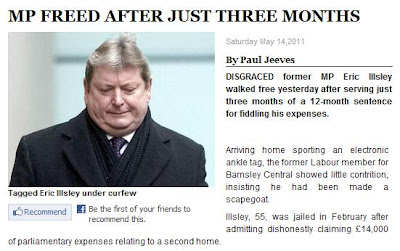 The poor little lamb still doesn't get it. The summonses for non-payment of Council Tax arrived today. Mrs EU Referendum and I got our "his 'n' hers" matching set in the post. The darling little Illsley and his cherished little mates can whinge, but do they not realise that the penalty for not paying Council Tax in this country is an indeterminate prison sentence, without even the benefit of a trial?

These people just do not get it. By the writ of state violence do they take our money, making a mockery of the concept of freedom. No property owner in this country is free. We are on license, allowed our freedom only if we pay our annual dues to the state. And the last MP I spoke to thought that was such a good idea.

Yet, when these people are finally banged up, they who so freely raid the public purse – without even the benefit of the fig-leaf legality that so many of the thieves arrange – they weep in their cups at the injustice of it all. Illsley is right in one respect though. There are a lot more MPs who should be imprisoned. David Laws is one of them, and the more his case is examined, the worse it looks. He should be jailed on the same standard of "justice" that Council Tax non-payers get.