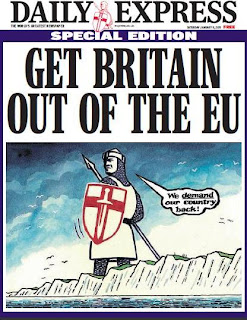 I feel a bit like Robin Horbury here, who writes a fine piece on Biased BBC himself complaining about feeling like a "cracked record". You can only keep on saying the same things over and over again for so long before even you get tired of your own voice.

Another thing I also get a little bit tired of is being branded the "bad sod", the one who is always out on his own, who can't join in and put his weight behind the common cause.

That much has been put to me about the Referendum Campaign and also the anti-EU campaign in the Daily Express, which has culminated in the publication today of a 23-page booklet, telling us that we must, "Get Britain out of the EU".

It is not, of course, that we do not agree with the sentiment, but the front cover tells you everything you need to know about the eurosceptic thinking in this country. Redolent of the famous 1940 Low cartoon (inset below), it has the trademark Express crusader standing on the cliffs of Dover, looking out toward the Continent – where (by inference) the "enemy" exist.

And here the "cracked record" comes in. The EU is not a foreign construct imposed on us. Our government is an enthusiastic part of the EU nexus and the only reason we are in the EU is because Parliament permits it. It is not looking over the Channel to the Continent that our brave crusader needs to be doing. He needs to be looking inwards, tearing down the gates of Westminster. The enemy is within. 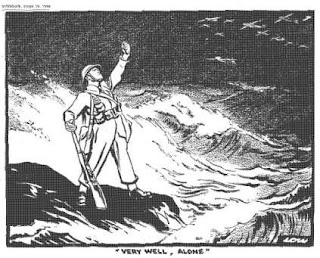 That said, if there was any doubt that the Express had lodged itself in the last century, we just need to read the offering from editor Peter Hill, where the tone – and content – would be familiar to anyone who had attended UKIP meetings ... of the '90s.

All the buzz-words are there, "sovereignty", the mandatory reference to "Napoleon" and "Hitler", the "wine and milk lakes" and the "butter and grain mountains", not forgetting, of course, the swipe at the "superstate".

I have written too many pieces on this blog about the fate of euroscepticism to want to repeat them, but in the forty years, on an off, that I've been fighting the EU, I would like to think I've learnt a thing or two about the enemy, and how to fight it.

Mr Peter Hill of the Express, however, doesn't appear to have learnt a thing, and the eurosceptic movement is a moribund as ever if that is the best it has to offer. In that sense, the movement itself is the cracked record, endless repeating the same tired, jaded message, while the world carries out without it.

We have to be capable of doing better than that and, until we can, I want no part of it.