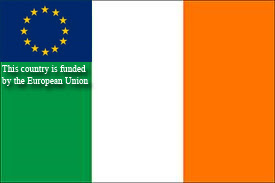 The extraordinary editorial in The Irish Times yesterday asks "whether this is what the men of 1916 died for: a bailout from the German chancellor with a few shillings of sympathy from the British chancellor on the side."

"There is the shame of it all," it says. "Having obtained our political independence from Britain to be the masters of our own affairs, we have now surrendered our sovereignty to the European Commission, the European Central Bank, and the International Monetary Fund. Their representatives ride into Merrion Street today."

But its one of their commenters, Bryan O'Donoghue, who reminds the newspaper that it has been consistent cheer-leader for the project. Not least, we ourselves can recall, it was a voluble supporter of the Lisbon treaty. Thus asks O'Donoghue: "Has this paper once openly opposed a European integration step, no matter how undemocratic or how much power it concentrates in the hands of the EU3?"

"Why," he then asks, "now turn around a[nd] criticise the power that has been handed to Europe due to successive treaties, unions and economic arrangements, that the IT, is a principal supporter of?"

Much the same we see in no less than three self-serving articles in The Daily Telegraph stable, starting with a dire contribution from Peter Oborne whose intellect declines by the day as he surrenders to the herd mentality of his own newsroom and editors.

It is not that he is innately stupid – he is not. But there is the bovine stupidity of the herd, to which it is almost impossible not to succumb, if one seeks to run with it. The "insider" sacrifices their own freedom of thought for the comfort of herd approval and support.

So it is with Hannan, who offers this, a witty little contribution from a man who will be everything a eurosceptic could possibly want, short of actually being a eurosceptic.

But the prize goes to the leader, written by some anonymous hack, glad, strident words from a newspaper which is full to the brim with eurosceptic sentiment but which, when the chips are down, supports our membership of the European Union, and runs with the idea that Cameron is a eurosceptic.

Not one of these can see the lesson from the experience – that the malign institutions of the European Union spell the death the nation state and, the longer we are in the Union, the more damage it will do. None of these timorous wee beasties can bring themselves to countenance breaking away from the larger herd.

Would then, that Oborne could put a mirror to the words that grace his piece as a headline: "Heseltine, Mandelson, Clarke ... they all owe Britain an apology". Eurosceptics were mocked for warning that the euro would be a disaster – but they saved us from a terrible fate ... ", he writes.

But we are still mocked, by the likes of him and his vapid, stupid little mates in the newspaper and the Conservative Party which they support. This, never forget, is the party which employs eursoslime Clarke and still reveres traitor Heseltine, and which ignores our warnings that the European Union and not just the euro is the disaster. This is the Party of Euroslime Dave.

Until this paper, and then the Conservative Party, do the decent thing, and take our warnings seriously, they are just like the rest, only more so for their hypocrisy and faux euroscepticism – objects of contempt and pity.