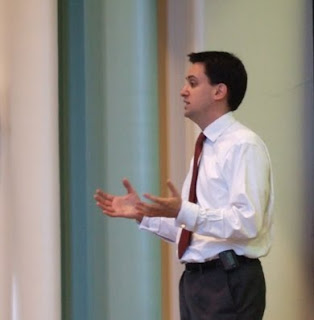 The pomposity of a second-rate politician - of whom even his best friends would admit has a brain cell count that matches the number attributed to the average IQ of a chimpanzee - telling his audience that it would be "profoundly irresponsible" to use "one mistake" as an excuse not to act on climate change, is beyond breathtaking.

But that is Ed Miliband for you, a climate change secretary who manages to display a level of arrogance on the subject which can only stem from a man possessed of an uncharted void in place of a brain. Only one so handicapped could speak in a public forum without being mortally embarrassed by his own inadequacies.

The intellectual pygmy thus speaks of "one mistake", referring to "claims that some leading scientists exaggerated the melting of the Himalayan glaciers." This, Miliband avers, does not "undermine decades of climate research"

What he ignores – or simply does not know – is that the inclusion of the claim that Himalayan glaciers could disappear by 2035 in the IPCC AR4 report was not a "mistake". The man who included it, professor Murari Lal, says so - stridently - so who are we to disagree with him?

Thus, while the dismal Miliband avers that "recent controversies over scientific data have not undermined efforts to tackle global warming," he glides over the essential element of the Himalayan glaciers scandal (and that it is) – that the authors of the report deliberately, with premeditation, set out to deceive, falsely to misrepresent the scale of the problem, such that it is, for wholly political reasons.

And, while a simple "mistake" could not be taken as undermining a broader thesis, evidence of structured deception is in a different league – especially the cumulative evidence from "Climategate", through "Glaciergate" to "Amazongate" and beyond. This is a powerful indicator that the whole of the IPCC AR4 is nothing but a systematic fraud.

In The Observer yesterday, however, we get the full force of Miliband's moronic tendencies, where the fool tells us: "We know there's a physical effect of carbon dioxide in the atmosphere leading to higher temperatures, that's a question of physics."

For a graduate in philosophy, politics and economics to presume to lecture us in basic physics is an arrogance beyond measure, but then to offer us a Janet and John version of the presumed behaviour of a trace gas in a complex, chaotic system that is poorly understood and even less well modelled, and to present it as the gospel truth, rises to the level of the surreal. The problem is that the man is so utterly stupid that he probably believes what he is saying – a very dangerous trait for a politician.

"We know," he bleats, that "CO2 concentrations are at their highest for 6,000 years" – a contentious statement at best. But then, he plumbs the hitherto unexplored depths of ignorance by telling us that "we know there are observed increases in temperatures."

Clearly, this pathetic excuse for a human being simply does not have the intellect to perceive that the "temperatures" to which he refers are artifices, constructs which are calculated from adjusted raw data, of dubious provenance, subject to multiple errors, distortions and, most likely, fraud. They are no more real than was Luke Skywalker flying in his X-wing fighter into battle against the Death Star.

Not content with this, though, Miliband then struggles to a climax, managing to gather a quorum of brain cells sufficient to deliver the immortal, if risible assertion that: "we know there are observed effects that point to the existence of human-made climate change. That's what the vast majority of scientists tell us."

These "observed" effects, presumably, include the shrinking glaciers, the melting icecaps, the dying polar bears and the disappearing Amazon forests, all of which his "vast majority of scientists" are telling him are caused by climate change.

Fortunately for this creature – the thing that calls itself Miliband – its bizarre utterances were delivered at some distance from its audience. It is thus – one hopes – sublimely unaware that its sentiments cause to surface primitive urges from the depths of the subconscious, buried so deep that one is shocked to learn that they still exist.

One is hesitant to allow these "urges" full rein. Now that would be profoundly irresponsible.