How can we help 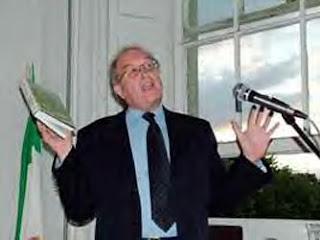 Yesterday evening Dr Anthony Coughlan a long-term campaigner in Ireland, the man who is responsible for the fact that referendums are called in that country before treaties are ratified and also for the fact that two of them, Nice and Lisbon, were given a NO before the Irish were forced to vote again, gave a talk to the Bruges Group about the Constitutional Lisbon Treaty and the situation in Ireland.

Afterwards I managed to sit down and have a long chat on what we can do to help on this side of the Irish Sea. It is very limited because there is legislation about funding from abroad during electoral and referendum campaigns. Naturally, this does not apply to the EU or the Commission as they do not campaign, merely produce information (mostly descriptions of feats of flying by the Porcine Air Force).

Nor would it be a good idea to have speakers from Britain, which rather upset me as I was looking forward to a possible visit to Dublin, a city I love dearly. The Irish government, astonishingly enough, plays the nationalist card while campaigning for the final destruction of the Irish Free State.

However, if the NO campaign provides information that is rather a different affair. Their aim is to publish a newsprint version of the annotated Consolidated Treaties, showing how the Lisbon Treaty changes the existing situation. It is complete with a detailed glossary and index and would be an excellent weapon in the fight if it went out to every household with a neutral letter that called attention to the need to understand what people are voting about.

The other issue is President Klaus's pen, which is, at present in the air as he stubbornly refuses to sign the treaty's ratification in the Czech Republic. He can, in fact, keep that pen in the air indefinitely but if the Irish vote YES in October the pressure on him to sign will be huge.

His office has been hinting heavily that it would be easier for him to resist that pressure if he could say that he had had numerous letters and requests from Britain, particularly from the British Conservatives, asking him to hold back the signature until the General Election after which the latter are likely to form the new government with the intention of giving the British people the referendum that they had been denied previously.

To be fair to President Klaus, he sounds rather doubtful about the Conservatives and their intentions in connection with the Constitutional Lisbon Treaty. But it is possible that he could use letters from British MEPs, MPs and peers as well as various organizations to bolster his own argument for not signing. A letter from the Shadow Foreign Secretary, of course, would be ideal. But that would presuppose that the Shadow Foreign Secretary actually cared one way or another about the subject.