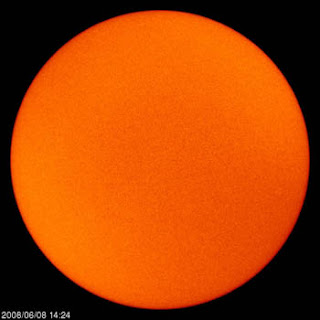 It has not escaped notice that many eurosceptics (or euro-dissidents, as has been suggested as a better title) also fall into that category known dismissively as global warming "deniers". Whether all euro-dissidents are also deniers is a moot points, but it certainly seem the case that all europhiliacs are "warmists".

No more so is that association true than with the BBC, which manages to combine its support for the European Union with a climate evangelism that brooks no dispute.

However, as Booker observes today, there is something "comically forlorn" about its continued efforts to promote its frenetically one-sided belief in global warming.

It was inevitably quick, for instance, to pick up on that bishop who compared us "deniers" with Josef Fritzl. But, the things you will not hear from the BBC are: "Globally, 2008 significantly cooler than last year" or "Global temperatures dive in May".

Yet these have been the fare of numerous websites dealing with the issue, not least Watts Up With That which has been reporting the latest data from Dr Roy Spencer, formerly head of climate studies for Nasa.

Based on satellite and balloon temperature readings taken at various levels up to 135,000ft, the first item showed that global temperatures in the first months of 2008 were on average between 0.4 and 0.5 degrees Celsius lower than they were at the same time in 2007. The second said that temperatures in May again fell sharply, by nearly 0.2 of a degree, bringing the drop since January 2007 to 0.77 degrees.

In other words, writes Booker, in just 16 months we have seen global cooling greater than the 0.7 degrees net warming recorded by the UN's Intergovernmental Panel on Climate Change for the whole of the 20th century. Yet it was on this figure more than anything else that the whole warmist theory has been based. Those IPCC computer models never predicted anything like this recent drop in temperatures.

It almost goes without saying, but Booker says it anyway, that had these data showed a jump of that magnitude in warming rather than cooling, they would have been top of the BBC news.

Nevertheless, the "warmists" are already moving to pre-empt this challenge to their beliefs, the latest example being Fred Pearce in the Guardian’s Comment is Free, that temple for Green theology.

Pearce complains that, "the deniers of global warming are about to latch on to a new argument: the world is cooling. Inevitably, we then see the increasingly well-rehearsed alibi that this is merely masking the underlying warming, By late next decade," we are told:

… natural warming will once again combine with man-made warming to push temperature rise into overdrive. The surge that we saw through the 1980s and 1990s will resume with a vengeance. That could be the moment that climate change passes a point of no return, when ice sheets start to collapse and parched rainforests and soils dump their carbon into the air, accelerating warming.

This is getting like the latter days of the "mad cow disease" scare. Initially, pundits had it that the incubation period of the disease supposedly transmitted to man was in the order of five years. As the predicted epidemic did not materialise on schedule, the incubation period drifted upwards to ten and then, eventually, twenty.

In the end, as the body count failed to mount, we surmised that the ultimate incubation period must have extended to over 100 years. The scaremongers had not been wrong. We all would have died from eating beef, but for our inconveniently short life span.

Nothing more of Mr Pearce's disingenuous arguments need detain us further but what is really interesting about his piece is that it has attracted (at the time of writing) no less than 156 comments – by far the majority from "deniers". Clearly, outside the loop of the BBC, the rest of the media and the politicians, there is a vibrant debate going on.

That is the true measure of the media and the political classes. On this subject, on issues like immigration and even the EU, they are behind the curve. But, with their near monopoly grip on the political discourse, you would never guess. Yet, as the Climate Change Bill returns to the Commons tomorrow, never more will it be evident that they have lost the plot.

Meanwhile, enjoy a re-run of that scariest photo - updated. There are no sunspots. Still cycle 24 has not materialised – another thing you will not hear from the BBC.