A fight over principles in France 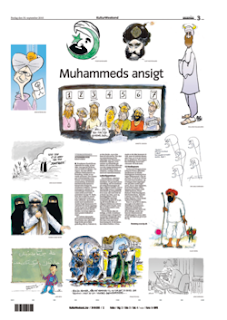 As we have pointed out before, it is not the Continental countries that were found wanting in the War of the Danish Cartoons, but Britain. To be quite precise, the British media, not a single one of whom dared to reprint the cartoons, bleating idiotically about not wanting to upset people. Especially people who might come after you, one suspects. The Guardian and the Independent have had no problems about printing anti-Semitic cartoons of the kind that could have come out of Der Stürmer.

One of the magazines that did do the right thing was the French Charlie Hebdo, now sued by the Grand Mosque of Paris and the Union of French Islamic Organizations for inciting racial hatred.

It is not that they want censorship, they whine, but they do not think cartoons that make fun of Islam should be published.

A televised debate between Charlie Hebdo publisher Val and Dalil Boubakeur, rector of the Paris Grand Mosque, broke up acrimoniously on Tuesday after they squabbled over the limits of free speech.

"If we can't criticise religion anymore, there will be no women's rights, no birth control and no gay rights," Val said in the raucous TV debate.

Boubakeur said the controversial cartoon showing Prophet Muhammad with a bomb in his turban was not simply satire, but an insult against all Muslims by suggesting they were all terrorists.

"We don't want censorship, we don't want the sacred to be protected by blasphemy laws or medieval jurisdiction," he said.

Boubakeur said last week he wanted to show that reprinting the cartoons was a provocation equal to acts of anti-Semitism or Holocaust denial, which are both banned under French law.

Um, well, of course, anti-Semitic attacks have gone up in France (and in Britain) in the last few years and many of them originate with the Muslim community. Those attacks are not simply words or cartoons but actual physical acts against people, schools, cemeteries and synagogues.

To repeat for the benefit of those of our readers who do not bother with most of what we write: this blog does not believe Holocaust denial should be illegal in any country.

It seems that the case may well be one of the seminal ones in French legal history, though in a different way from the Al-Dura one, which we wrote about here and here.

Politicians, intellectuals, secular Muslims and left-wing pressure groups have lined up behind Charlie Hebdo, arguing that Muslim groups have no right to call for limits on free speech.

"I just cannot imagine the consequences not only for France but for Denmark and Europe if they lose the case," Fleming Rose, the Danish editor who first published the cartoons, told a news conference with Charlie Hebdo publisher Philippe Val.

The left-wing newspaper, Libération has reprinted the cartoons, saying quite firmly that it is not words or pictures that kill but bombs. True enough and time it was said forcefully. Are we going to see a similar outburst of bravery in our media or will it all be left to the blogs again?