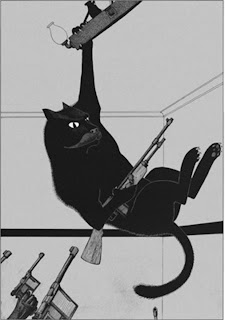 Time for us non-toy fanatics to reassert ourselves and to produce the alternative toys series.

First off is an excellent illustration to one of the greatest of the twentieth century novels, Mikhail Bulgakov's "Master and Margarita". This is an updated version of the Faust story, as well as a hilarious satire on the Soviet Union, interspersed by chapters that give a completely new interpretation of what happened before, during and after the Crucifixion.

The cat in question is Behemot, part of the Woland's (the Devil) entourage. His adventures alone make the book worth reading. Here he is having a "duel" with assorted police and NKVD officers who are trying to arrest him.