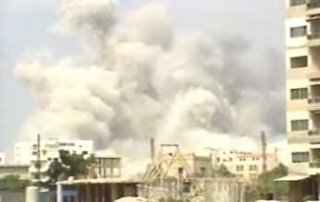 We have heard endlessly about "indiscriminate" Israeli bombing in Lebanon, not least from the egregious John Simpson, whom the BBC has despatched to the town of Tyre to witness its effects first hand.

Simpson was not disappointed for, while visiting Tyre hospital, the Israeli Air Force obliged with a bombing attack so conveniently positioned that our fearless hack was given a grandstand view from the window.

Moving outside, Simpson describes the "panic" caused by the attack, illustrated by a shot of one ambulance moving off at high speed from outside the hospital (waved off by a white-helmeted "Green Helmet").

But such is the obvious confidence that Simpson has in the accuracy of the Israeli bombing – and the clearly defined targeting – that throughout the raid he stands out in the open, witnessing the events, giving a calm, utterly relaxed commentary for the benefit of BBC viewers. In his shirtsleeves, he does not even trouble to wear the mandatory BBC blue flak-jacket, much less a helmet.

The funny thing is that, had he been in Kiryat Shmona during a Hezbolla rocket attack, he would have been running for his life to the nearest shelter. But there you go… that's discrimination for you.