The net is widening 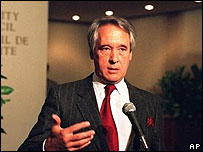 One of the great advantages of this blog is its readers, who continue to be alert for stories that we might use. Unlike the MSM we are not only grateful we also take up their suggestions.

At least two members of the forum have pointed out that there has been another arrest in the oil-for-food scandal. As the row about the running of the internet goes on, it is a timely reminder of the sort of people who would, if the disaster happened, be in charge of that precious resource.

A French investigative magistrate, Philippe Courroye has detained the former French ambassador to the UN, Jean-Bernard Merimee, according to the Washington Post,

“to determine why former Iraqi president Saddam Hussein's regime granted him rights to purchase about 4.5 million of barrels of Iraqi oil at a discounted price.”

According to Claudia Rossett, the journalist who unravelled the story in several newspapers, after it was first uncovered by MEMRI,

“The 68-year-old Merimee, one of several individuals now under investigation in France for alleged involvement in Saddam Hussein’s Oil-for-Food scams, is well known for his role in the early 1990s as French ambassador to the United Nations. What investigators have not so far highlighted is that during the period Merimee is alleged to have come into commercial contact with Saddam’s regime, starting in December 2001, he was working not for the French government, but as a special adviser to U.N. Secretary-General Kofi Annan.”

Those sniffer dogs are circling round and round the SecGen.

There are other interesting aspects to M l’Ambassadeur Merimee’s career:

“According to [UN spokesman Stephane] Dujarric, Merimee’s job as special adviser to Annan was to help the United Nations negotiate a framework for “the disbursement of funds” from the European Commission to the world body, leading to a deal that was signed in 2003. Presumably, that entailed no direct link to Iraq. But it did place Merimee in the sensitive spot of negotiating for the Secretary-General over arrangements for European funding for the United Nations.

Merimee was still doing that job in the months following the Sept. 11, 2001, terrorist attacks on the United States, as the debate began turning hot over Iraq – a debate that ultimately polarized with Annan lining up with European heavyweights Germany and France to protest the U.S.-led coalition’s overthrow of Saddam.”

But surely M. l’Escroc Chirac stood up to American aggression out of pure idealism? That is why he and the likes of M. Merimee think that they should be in charge of the internet.