Why we should oppose TTIP and leave the EU 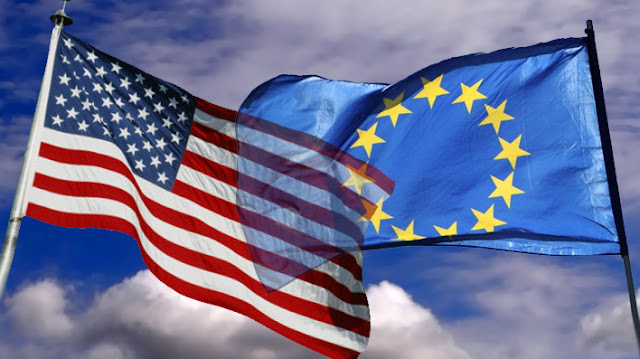 Leftists are finally coming out of the woodwork to declare their euroscepticism. This in my eyes weakens the case for leaving the EU. When you have the RMT, Owen Jones and Ukip on your side it looks pretty grim. The leftist arguments are starting to merge with those of Ukip - not least in their opposition to TTIP.

As we have noted, opposition to the EU over Greece is wholly irrational, especially from the right - for whom it is also wholly inconsistent, but TTIP is something they both agree on. The chief complaint being Investor State Dispute Settlement (ISDS). But you can see why corporates would lobby hard for it. COSCO was heavily invested in the bidding process for Greek shipping ports and then on day one of Syriza's rule, privatisation of ports was taken off the table. Democracy is a volatile thing. Why a nation should not be held accountable for ripping up contracts I don't know.

It is said that the nature of ISDS courts and their secret nature would lead to corporate gouging of the taxpayer, which is a real concern - but what is interesting is that the left placed their insistence on it not applying to healthcare when it is a much more serious concern for infrastructure and defence. But such intellectually inconsistency is only to be expected from the left and Ukip.

That is not to say it is a not a genuine concern. Just because the left are anti-trade and broadly protectionist does not mean the right should be dogmatically in favour of TTIP. Anti-corporatism, or crony capitalism, is a cornerstone of libertarianism. It is a matter of fact that globalisation is happening, it brings enormous benefits to us and the emerging markets of the world and makes us all wealthier. A trade agreement between the EU and the US is going to happen in one shape or another and most of us will be better off for it.

The problem is that it lacks transparency and accountability. It isn't democratic. People we didn't elect will be making agreements that won't be challenged by the European Parliament, not least because MEP's are not intellectually equipped to even approach it. Especially not the fringe lunatics like Ukip. It's bad for democracy here at home too.

In effect we're seeing the death of domestic politics as it has effectively outsourced most of the politics of substance. It's why we have government ministers debating whether or not teachers should have the powers to confiscate unhealthy snacks from children's lunchboxes. It's displacement activity.

These agreements are happening almost completely without national scrutiny and no right of independent veto. As much as this can mean more regulation (which is not always a bad thing) it mainly means regulatory convergence, which often means compromise - which too often results in a lowering of standards or a reluctance to regulate at all in the knowledge an agreement will probably fail.

What we need is our own voice at the top table table to ensure that we get the very best from such global agreements and that we can veto deals that harm our own standards. More than this, I want to see parliament re-energised and focussed on the stuff of consequence. More than this, while we expect TTIP will eventually get where it's going, a lot will have been removed from it. It will not resemble the original proposal in scope and depth. And that's actually a pity.

The problem with the EU is it's insistence on bloc trade deals applying to almost everything whereas Mexico has seen much faster growth in the automotive sector by a process of unbundling - ie industry and sector specific trade agreements which happen bilaterally and with fewer compromises. That is the future of global trade.

Opponents of TTIP oppose it from an anti-globalisation perspective - fearing a gradual global homogenisation and an erosion of democracy. The former complaint is pointless. Technology and progress demands globalisation. It is happening and it is a force of nature equal to gravity. So the question for my generation and the next is how we harness that force without sacrificing democracy.

There does need to be an ISDS mechanism. There is no good reason why any sector should be exempt from it either. Nor is it unreasonable for agreements to have conditions that demand structural and economic reforms as we have seen in Greece. But the EU is not the vehicle best equipped to manage this process. It needs to be more consultative and cannot be as the EU is where entire nations are summarily overruled - particularly in our case where we have nations that don't even have a car industry blocking trade deals that we would benefit from enormously.

The fact is that unbundled trade agreements are much faster to achieve, and more likely to succeed. As it stands TTIP has all but stalled, taking us back to 1992. Such agreements can take decades whereas a simple agreement on global standards for painkillers or wheelnuts is far more achievable - and it means areas where we have particular standards and concerns cannot be overlooked for the sake of expediency.

The world is developing in a different way to how the architects of the EU envisaged. Rather than large blocs forming sweeping agreements we're looking at inter-governmentalism and sector specific global trade associations. The model is incremental and tailored according to the development status of the participants. This is alien to the EU.

This is why there is an apparent intellectual inconsistency on this blog. I have welcomed Greek port privatisation on the behest of the EU but at the same time oppose mandatory land reforms and wholesale privatisation in Ukraine. Greece is developed enough and has had single market access long enough to (notionally) be able to carry off such reforms. It just doesn't want to despite having agreed to it. Ukraine and Poland however have some considerable distance to travel become they are economically and culturally able to fully converge with the mainstream single market. A one size fits all approach, imposed all at once is simply not a good idea. Not in the region and not globally.

The removal of border tariffs and complaining about African protectionism may be free trade in principle, but it goes against the principles of international development. In order for there to be free trade there needs to be an equilibrium between trading systems - trading on like for like terms. Dismantling protectionist development mechanisms to pursue a dogmatic free trade agenda has been a disaster for Kenya, is damaging to Poland and may be catastrophic for Ukraine.

Outside the EU, we would have a good deal more power to put the breaks on the EU by vetoing proposals at the top table to prevent the free trade wrecking ball undoing efforts to nurture open up new markets.

It has been proposed this week that Britain should rejoin Efta, which is indeed part of the interim solution in that Britain would be a leading voice in Efta and a necessary counterweight to the EU at the global level. That is presently more influence than we have a subdued EU member. What we can then do is overtake the EU in securing unbundled agreements with the USA (and beyond) and achieve more than we could waiting decades for whatever compromise the EU can cook up.

TTIP represents the thinking of the last century in a world that is so much more dynamic. We are and always have been a global leader in setting standards and anything that reduces those standards is an unwelcome development, and anything that subordinates our parliament to the level of a local council is insufficient. Our own MPs need to be fully engaged in matters of trade and development but instead, because it's an exclusive competence of the EU, it's something we barely even discuss anymore. It's why the level of debate about trade in the UK is so lamentably shallow.

We can't stop globalisation, we can't have global trade without some kind of dispute settlement mechanism and we can't always expect there won't be losers as well as winners in any final agreements - but a system that progresses without consultation or consent is one that cannot survive. The future is a world of nations speaking as equals with fully engaged legislatures, not as subordinates of unaccountable blocs who outsource their lawmaking.

The case must be made for an assertive Britain leading the way for globalisation and making it work while keeping our democracy. The shallow and timid worldview of Ukip is not the solution, nor is the paranoid protectionism of the left, but the imperialism of the EU is obsolete, hubristic, anti-democratic, slow and in some cases dangerous. That is message the leavers need to promote, otherwise we're stuck for another generation in a decaying and stagnant bloc with delusions of statehood. I'm not certain we can survive that.
Posted by Pete North at 06:06