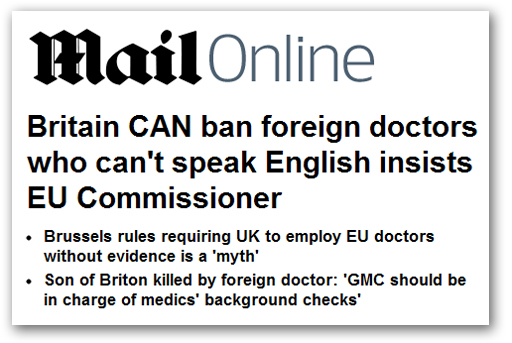 The Daily Mail has today in its print edition a plaintive rejoinder from EU internal market commissioner Michel Barnier, who is insisting that Britain is free to ban foreign doctors if they cannot speak English or there are concerns about their professional ability (above).

"European laws are putting the lives of British patients at risk by allowing incompetent and poorly trained foreign doctors to work in the NHS, two senior doctors warned today", the Daily Mail then reported (below).

However, someone should perhaps have asked these two esteemed gentlemen why they had not read the newspapers, and in particular the Daily Mail for 4 October 2011. This informed us that foreign doctors would be barred from treating patients unless they have a good grasp of English "under tough rules to be announced by Andrew Lansley today".

The Health Secretary would "pledge to end the scandal which has seen 23,000 doctors from Europe registered to work in the NHS – despite never having been asked if they can speak the language properly" (below). 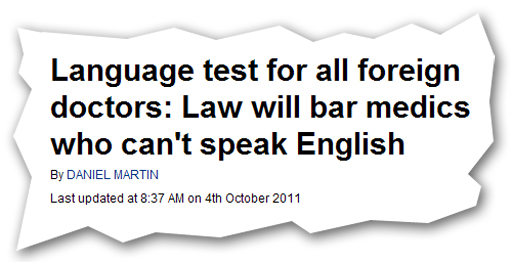 And even if the good doctors haven't noticed this, the nurses certainly have. The Nursing Times acerbically noted on 6 October, 2011 that "Language tests for nurses less pressing than for doctors, says DH".

It reported that a ban on (central) language testing for nurses is to remain in force, even though the government is overturning that on doctors on the grounds that they pose more of a risk to patients.

The report thus confirmed the Daily Mail report, stating that the Department of Health had announced it would allow the General Medical Council to test the language skills of doctors from within the European Economic Area (EEA) who want to work in the UK.

And, in fact, it has always been the case that language skills of medical professionals have been amenable to testing. EU law does not prohibit it. What EU law does do though is prohibit a uniform ban on employment, by virtue of an inability to speak good (or any) English. Each case must be treated on its merits.

In practice, this meant that regulatory bodies like the Royal College of Nursing and the General Medical Council could no longer make language competency an exclusion criterion under the Professional Qualifications Directive (Directive 2005/36/EC). Instead, the onus was placed on the employer, to ascertain that individuals had suitable language skills for the specific jobs in which they were to be placed.

And therein seems to lie the problem. As late as 14 January, the Daily Mail was reporting that 90 percent of hospitals fail to check on nurses' English before letting them work on wards. Language problems, it said, only come to light when patients' requests were not understood

Then it told us that many hospital chiefs (despite their high pay) were "totally unaware that due to strict anti-discrimination rules imposed by Brussels, it is illegal for the Nursing and Midwifery Council regulator to check the English language skills of nurses trained in EU countries".

The Department of Health and the Royal College of Nursing, said the Mail have told hospitals it is their responsibility to make adequate checks but the guidance was not always passed on to managers in charge of recruitment.

So, we can rightly blame the EU for disrupting established systems, and requiring a cumbersome and expensive regime for individual employers, who now have to ascertain whether potential employees can actually speak and understand English to an acceptable level. But then what responsible employer does not check whether their employees can do the jobs for which they are hired?

We cannot, therefore, blame the EU for the incompetence of those employers who have not realised their own responsibilities, and taken the necessary measures to ensure their staff are capable of doing their jobs. Those failures, it would seem, are home-grown.