Off with their veils 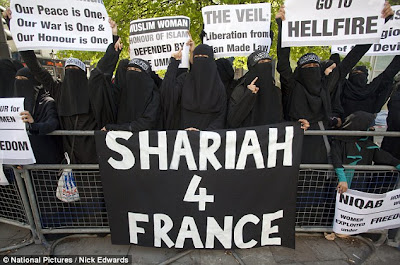 One has to say that the police would be better employed arresting these little madams. It isn't against the law to wear a burka (or niqab, if that is what they want to call it) in public, but it should be ... and since modern policing seems to be about making up the law as you go along, this is a good way to start.

This is not about religious freedom. There is nothing in the koran about wearing one, and neither is it a muslim dress ... it is an Arab dress, originally worn by the wealthy, as a demonstration of how wealthy they were. And that is what it is today ... a demonstration.

This most definitely has public order implications, as it is a deliberate, "in your face" political statement, a rejection of this society's values. It should be banned here, and if they don't like it, then they know where they can go.

How interesting it is, by the way, that if you type in "koran" on Word, the default value on the spellchecker is to capitalise it. Yet it is entirely indifferent to how you type "bible". This is a small example of our cultural surrender, but it comes from the same wellspring. We must reject it.

But it all goes back to those cowards in Parliament, past and present, who allow this to happen - and then standing idly by while the plod bully and harass the people who complain.

These things are linked. Once Parliament gave up its own sovereignty, and the MPs decided that they no longer represented us, and stood up for OUR rights, this was going to happen. The fools don't realise it, but they are leading us by the nose to civil war.