Worth a snigger or two 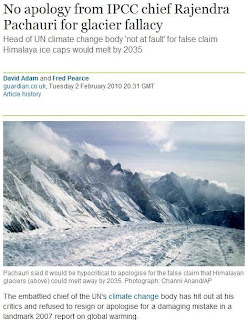 It is almost impossible to suppress a snigger when Pachauri, with all the sincerity he can muster, tells us it would be "hypocritical" to apologise about the melting glaciers.

Hypocrisy is something Pachauri knows a great deal about, and on this he is perfectly right. It would indeed be hypocritical, for he feels not the slightest bit of remorse. Nor does he seem to have any sense of responsibility for his own conduct.

Nor indeed, do his statements have even a passing acquaintance with the truth, as he persists in perpetrating the falsehood that the glacier claim was "an isolated mistake," that it was "down to human error" and "totally out of character" for the panel.

Those that care enough to find out will already know that it was not a mistake – the inclusion of the false claim was deliberate – it wasn't isolated, and human error did not come into it. As to it being out of character, unfortunately, it is all too representative of the IPCC and its structured, premeditated scaremongering.

However, the statements uttered by Pachauri, and retailed in today's edition of The Guardian are part of a sustained damage limitation exercise which started on Sunday in the Indian media and which is radiating outwards in a last-ditch attempt to salvage the tattered reputation of the IPCC and the good doctor.

Observing some of the efforts of the IPCC's defenders, Mrs EU Referendum was heard to observe: "they couldn't even lie straight in bed". This, I believe, is a traditional Yorkshire saying – usually reserved for politicians.

Most enjoyable of all Pachauri's thrashing was his piece in the Hindustan Times where he declares: "They can bend me, but they can't break me."

The man is obsessed with the idea that there is a global conspiracy ranged against him, unable to understand that he is actually facing a backlash from real people who are just sick of his cant and his scaremongering. But, even under attack, his arrogance shines through, as he tells us:

He then also declares:

There is only one error (Himalayan glaciers melting by 2035), to which we have admitted. After that the errors reported are spurious. They (some western media) said the IPCC claim on the losses from disasters was not from an authentic source. We checked the source; it was authentic.

We will put up a statement on IPCC website (clarifying errors), this is it. We are not going to answer these spurious individual complaints coming in only two sources, The Times (London), and, more importantly, The Telegraph.

Despite what Pachauri is saying, there was expressed a real sense of unease in the Newsnight programme (we'll post a link when it's up - part here), as numerous commentators gave every indication that they understood the depth of the crisis confronting them.

And, with Fred Pearce back in The Guardian, questioning peer-review and the hockey stick, with Moonbat also holding forth, it is clear that there is indeed a crisis.

Even Phil Jones says he's concerned that scepticism about climate change appeared to be growing, recorded in The Times telling us: "It makes me quite worried people are beginning to doubt the climate has warmed up." He should be more worried that Moonbat has declared, again, that the e-mail scandal shames the university and requires resignations, not only Jones but others.

"You'd have to have a heart of ice not to laugh," writes Melanie Phillips on her blog. She’s referring to Stern and the Tories, but she could just as well be writing about the whole mess. And if not a laugh, it's certainly worth a snigger or two.