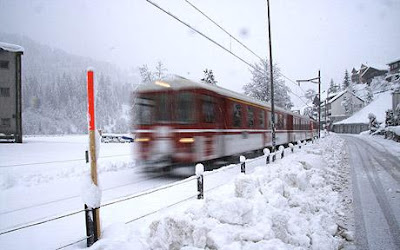 The warmists on The Daily Scarygraph ought to read their own newspaper sometime: "Fresh snow across much of Europe has got the ski season off to a promising start as Alpine resorts prepare to open this weekend." And it's snowing in Houston.

Even then, there are still cynics about. Nile Gardiner in The Daily Scarygraph reckons the UN investigation into the IPCC will be a "whitewash". That can't possibly be true. The UN lie to is? Shocking thought!

Thank goodness for the objectivity of The New Scientist. "We can be 100 percent sure the world is getting warmer," it says. And don't worry your pretty little heads about the data: "raw data almost always has to be 'fixed'". Phew! What a relief.

Forgive the confusion though. Biased BBC has a shock for us. It has a video of the BBC's environment correspondent Roger Harrabin saying this:

There is a sort of misapprehension here that we in the media have probably helped to perpetuate: that the science of climate change, all the details, are settled. In fact there's a lot of uncertainty about big areas of the science as to what will happen.

Hadn't somebody better tell Harrabin he's s wrong? Only yesterday, Ed Miliband was saying that "the science is clear and settled." He can't be wrong, surely?

Just to get these silly misunderstandings sorted, Small Dead Animals wants your comments in support of the Railway Engineer. Humour them ... it's the right thing to do.

BTW, does anyone know the forecast for Copenhagen?

CLIMATEGATE THREAD
Posted by Richard at 18:25