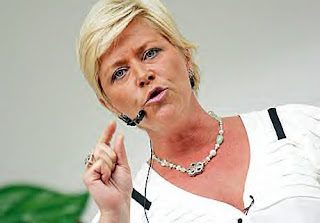 Not Iceland this time but Norway, which is showing no signs of wanting to apply to the EU but where an election is due in September.

The Economist makes a valiant attempt at sorting out the voting system and predicting what might or might not be the outcome. Naturally enough, the Economist is hoping that the present left-wing coalition will retain power and is clearly rooting for that to happen.

The general election in September looks to be heading for a close finish between the governing centre-left parties and the centre-right opposition. The Labour Party and the populist Progress Party are expected to dominate the final stages of the election campaign, but it is the showing by the smaller parties that is likely to determine which coalitions are possible in the new parliament.

With the election on September 14th just over one month away, the result looks like being extremely close. Recent opinion polls suggest that the ruling left-centre coalition, comprised of the Labour Party, the Socialist Left Party (SV) and the Centre Party, could remain in power, but with only a one- or two-seat majority. If it fails to win an overall majority, there are considerable uncertainties over which combination of parties could succeed in forming a new government. The rise of the populist Progress Party (which was evident even before the last election in September 2005) suggests that some voters see a clear right-wing alternative to the dominant Labour Party, but Progress could still find it difficult to find partners to form a government.

"Populist", in the pages of a "respectable" media outlet is a very bad thing, indeed, but it seems that:

Among the opposition parties, Progress has so far run the most successful campaign, benefiting from media attention on issues such as immigration and crime. Even the more serious "broadsheet" newspapers, such as Aftenposten, have had extensive coverage of East European criminal gangs operating in Norway. This has allowed the Progress Party to attack Labour for being soft on crime and the governing parties of the present and past administrations (in effect all the other parties) for allowing Norway to have such permeable borders. Support for Progress is more than double that of the Conservatives, meaning that Progress would dominate any right-of-centre government.

As a matter of fact even this Wiki entry on the Progress Party shows it to be no different from other political parties in leaders' behaviour and having reasonably sensible ideas that are popular with the people but not with the largely left-wing, tranzi-supporting political establishment of the country. No wonder they are being shunned by other politicians though not by the electorate.

What is actually wrong with this:

The policy of the party is to favour immigrants who quickly learn Norwegian and get jobs, while expelling the criminal foreigners. Generally the party want a stricter immigration policy, so that only people who are in real need for protection according to the UN Refugee Convention is to be allowed to stay in Norway. In a speech during opening of the election campaign for the 2007 election, the party chairman Siv Jensen claimed that the present immigration policy is a failure because it lets criminals stay in Norway, while throwing out people who work hard and follow the law.

This reminds me of a meeting in May hosted by the indefatigable Henry Jackson Society at which the impossibly glamorous Siv Jensen, Chairman of the Progress Party spoke. (I really, really hate those glamorous European women politicians, particularly if they happen to be on side. Our female politicians I can cope with. What's to hate?)

Ms Jensen talked of her admiration for Margaret Thatcher and the economic policies that encouraged global trade, which, in turn lifted 100s of millions of people out of poverty. Her party, she emphasised, believe in individual liberty and as little interference from the state as possible. Individual liberty, she said, is fundamental for human happiness and economic prosperity.

This sort of thinking is about as far away from fascism as possible but in the topsy-turvy world of modern political discourse those who believe in freedom are called fascists.

She then turned to the main issue on which her party is deemed to be untouchable by all but the electorate: immigration, culture and multi-culturism. She said very firmly that she supports multi-ethnic societies but not multi-cultural ones. (I appreciate that the distinction is often lost on both sides when this debate is conducted in this and many other countries but it is a very important one and it was good to hear Ms Jensen outline it so forcefully.)

The Progress Party, she said is against discrimination on all the usual grounds but does not believe in cultural relativism or the all-embracing welfare state. In other words, those who come in and assimilate, work hard and bring up their families must be helped and encuraged but Norway must not be seen as a safe haven for criminals who are not accepted in other European countries; nor can there be any question of Sharia law being introduced for anyone in the country.

So we can see why the party is gaining in popularity and why the rest of the political and media world, including our own Economist, watches its progress grimly. Now that I think of it, I wonder why Ms Jensen was allowed into the country. Why did our delighful Home Secretary, whoever it was at the time, not stop her on the grounds that her pronouncements are dangerous? Hmm, asleep at the wheel again.

There were several other points of interest in her talk, all to do with foreign affairs. Ms Jensen and her party dislike the notion of Norway being a special friend of terrorist organizations like Hamas and she ever becomes Prime Minister (not such an unlikely event, as it happens) that will change.

She considers the question of EU membership to be dead. There have been two decisive referendums and nobody is going to try for a third one. She herself, interestingly enough, was vaguely for membership, thus proving that the issue cuts across parties. Then she went to Brussels and realized that all the criticisms she had aimed at the Norwegian government could be doubled, tripled, quadrupled when it came to the EU. So she decided that as far as Norway becoming a member of this pernicious organization it was thanks but no thanks.

She also supports NATO though thinks there should be an open debate about its future role and thinks the West should get tougher with Russia, especially on the question of energy supplies, something Norway is particularly interested in.

Interestingly, her party is not particularly fond of the UN though she assumes that there is some way of reforming it and "restoring" it to some rose-coloured original quality. The trouble is, she explained, when a number of us argued with this notion, even criticizing the UN is a political hot potato in Norway. Nobody does it and one must move very cautiously.

Fair enough, I suppose. If the Progress Party establishes the notion that no sacred cow is sacred, not even the tranzis, that will be a big step forward.