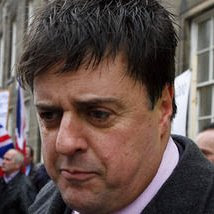 Despite the strenuous cross-party campaign against it, and the attempts to "puff" UKIP in the hope that it will Hoover up the protest vote, the BNP continues to make steady progress in local authority by-elections. It has also produced a "shock" poll result which worries The Sunday Express, pulling 38.4 percent of voters' support compared with 19.2 percent for Labour.

As to the latest local authority by-election result, this was at Irwell Riverside in Salford MBC to the north west of Manchester. There, in a safe Labour seat, the incumbent held with 38 percent of the vote, losing 13 percent compared with the 2008 result. The Conservatives, in an election it was never going to win, polled 12 percent, losing nearly five percent of its share.

Of the minority parties, UKIP and the Greens both picked up 8 percent of the vote but the BNP took 17.1 percent, the only party to increase its share of the vote, up nearly four percent.

The BNP claim a "solid performance" in a ward with over 2000 students registered on the electoral role. The National Union of Students, the party says, had lobbied via the internet to get the student vote out to oppose the BNP, but their efforts met with only a lukewarm response.

It also claims that "the result was a big blow to the Tories" who not only worked hard in the ward and also had their campaign boosted by the arrival of the party's euros election address, delivered just 24 hours before the polls opened.

Coincidentally, the Sunday Express poll was carried out in the Salford constituency, currently held by communities secretary Hazel Blears. The survey of 500 voters showed that Ms Blears would lose her seat, but it also suggests that a disillusioned 55 percent would not vote at all.

But the "shock" is that the BNP picked up 38.4 percent support compared to 19.2 percent for Labour. Tories took 13.4 percent of the poll, the Lib-Dems 10.7 percent and the Greens and the UKIP 7.1 percent each – uncannily similar to the by-election vote. If the result is repeated across the North-West in the euros, says the paper, Nick Griffin will be elected as an MEP.

It is unlikely though that this level of support will be repeated throughout the region. Although BNP is showing strong cluster of support, it does not have the spread enjoyed by more established parties. Nevertheless, in recent elections in two Carlisle wards, the party scored 9.5 and 19.7 percent of the vote.

Then, in Moston in April, there was a closely-fought contest between Labour and the Tories. This resulted in a near 11 percent drop in the Labour vote, but a catastrophic drop of 14 percent for the Tories – with BNP getting 23 percent and coming second – in its first appearance in the ward.

The spread of results, on the back of the Salford poll, does suggest that BNP is indeed in with a chance in the euros and, on the basis of that performance, Griffin is set to become the BNP's first MEP – possibly displacing UKIP.

However, with the Archbishop of Canterbury worried that the current furore over MPs' allowances could "play into the hands of unpleasant fringe parties like the BNP", The Daily Telegraph is today warning of the dangers in constantly talking up the "threat" of the BNP.

Similarly, The Independent is cautioning: "We must stop exaggerating the threat of the BNP", yet also noting the powerful online presence of the party, reporting that figures from Alexa show the BNP registering more traffic than highly publicised political blogs such as Guido Fawkes. (We reported that on 12 April.)

For once though, Rowan Williams might be getting it right. If anything, both the Telegraph and the Independent seem to be understating the threat.