Guessing about the future 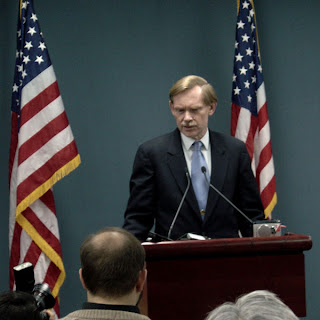 We are all assuming that the World Bank directors will accept Robert Zoelick as their next boss but will they and all those who have been screeching their triumph over Paul Wolfowitz be happy with what comes next? On Zoelick’s past performance it seems unlikely that he will be a typical tranzi as Wolfowitz’s predecessors, John McCloy and James Wolfensohn (a close friend of former SecGen Kofi Annan’s) were. At best, one can say that his immediate manners are smoother than those of Wolfowitz.

Der Spiegel has an interesting and rather unhappy article on the subject. Zoellick, they point out, is a man Germans know and like.

Robert Zoellick will be the first World Bank president to take office already decorated with the Federal Cross of Merit, Germany's distinguished state honorary badge. His predecessors John McCloy and Jim Wolfensohn also received the Cross -- but only later. Zoellick already wears it, in recognition of his efforts to help bring about German reunification. As the main United States mediator in the "Two Plus Four Agreement" -- the Treaty on the Final Settlement with Respect to Germany that emerged from the 1990 talks between the two German states and the four World War II victors, and which led to German reunification -- he vigorously championed German self-determination. The Germans thanked him by awarding him the order.

He is also a man who seems to believe strongly in free trade across the world. Certainly, he pushed many of the WTO agreements forward. So, everything in the garden is lovely? Sadly, no.
It seems that Mr Zoellick puts America’s interests first. I am shocked, I tell you, shocked. That a man employed by the United States government should put that country’s interests first!!!

Worse is to come. Robert Zoellick, it seems, is a long-standing friend of the Bush family and part of the very close political circle around both Bush Senior and Junior.

When George W. Bush, then still the governor of Texas, set his sights on the White House, Zoellick was part of an intimate circle of advisors led by later National Security Advisor Condoleezza Rice. They called themselves "the Vulcans" and they sought to transform him into a man of the world.

Gulp and double gulp. The President nominates someone who is close to him politically and personally and has also a formidable track-record in international negotiations. This just proves it. Not sure what it proves but it proves something.

In case the Europeans who managed to get Wolfowitz out (notably it was not the Asian or African members of the World Bank who hatched or even took part in the plot) should relax, Der Spiegel has this to say:

Zoellick is "moderate" only by comparison to Wolfowitz and his former Under Secretary of Defense for Policy Douglas Feith, a classic neoconservative, writes Tom Barry, the director of the left-leaning International Relations Center. Zoellick himself accepts the "the neoconservative premise of US global supremacy" but wants to "wisely manage that power," according to Barry.

He's not an ideologist, then, but an idealist: As early as one year before George W. Bush took office in January of 2001, Zoellick articulated his ideas about a "Republican foreign policy" in an essay for Foreign Affairs. The United States would shape the future world order on the basis of its military supremacy, Zoellick wrote, predicting the events of the years to come. "A modern Republican foreign policy," he wrote, "recognizes that there is still evil in the world." Bush himself couldn't have said it better.

In other words, the left does not like him but he seems to appeal to others in the US, whether they are Bush supporters or not. To me, that is quite a good recommendation. His tough love approach to the EU over Airbus and sundry other matters is also something in his favour.

Meanwhile, Irwin Stelzer views the issue from a slightly different perspective in the Daily Telegraph. In his opinion, the Europeans, led by the Germans, ably supported by our own Hilary Benn, himself involved in some doubtful financial activity (but that’s OK, chaps, he is one of us, i.e. nuanced), may well regret their Pyrrhic victory.

They did not achieve what they really wanted, which is a non-American as President of the World Bank because it was made clear to Bush by the people who matter, his American supporters that this was out of the question.

As Pyrrhic victories go, this one is top of the list. For one thing, George W. Bush heard in no uncertain terms from his supporters that they would raise a fuss if he appointed a non-American, even the respected Afghanistan central banker Ashraf Ghani, who holds both Afghan and US citizenship. For another, to sacrifice the wounded Mr Wolfowitz is one thing; to sacrifice the perk that goes along with being the largest single contributor to the World Bank, with no concessions in return, is quite another.

One did not have to be a Bush supporter or a Wolfowitz admirer to feel disturbed, not to say nauseated, by the proceedings whereby the latter was got rid of. In other words, American opinion on the matter became more united, give or take a few out and out left-wing Democrats and nutroots, whose hatred of Bush and everyone around him overcomes everything.

This may lead to what Europeans, in their hearts of hearts, fear most of all: a slow American disengagement from all these transnational organizations. What Mr Stelzer does not postulate is that there might be a much faster disengagement from Europe and matters European.

That, I am sad to say, will include Britain. It would not have escaped anybody’s attention that of the developed countries only Japan supported Wolfowitz throughout the whole mess. (Of course, the actual countries to whom his fight against corruption matters, also supported him but that is another story.) Britain, on the hand, was among the leaders of the pack.

There is, Mr Stelzer thinks, a slow realignment in American attitude to the rest of the world. This has been said before, as one or two of the sillier responses to the article point out, but never with so much force.

The Europeans' partial victory is going to come at a very high cost. Americans, and not only the neo-cons so reviled by the elite in Europe's capitals, are beginning to wonder about the usefulness of their commitment to many international institutions: "These institutions need to be rethought and restructured," said Bob Rubin, Bill Clinton's highly regarded treasury secretary. The fight over Mr Wolfowitz made Americans notice that they are squandering billions on armies of bureaucrats who think it a good idea to wreak vengeance on a man who shaped official US foreign policy, and a man who had as his central goal the elimination of corruption at the bank and among its client states.

Then there is the World Trade Organisation. The Democratic Congress has decided that the costs of ever-freer trade are too high to make the game worth the candle, and is preparing legislation that will end in tariffs on Chinese imports, restrictions on purchases from countries that do not meet US-determined labour and environmental standards, and the likely death of the Doha round of trade talks.

What of the other organizations?

Then there is the UN, an organisation that recently decided that Zimbabwe is just the country to put in the chair of its sustainable economic development committee. With an inflation rate of 2,200 per cent, rampant starvation and a bankrupt government, Zimbabwe's UN representative, who would not be in the job were he not a supporter of Robert Mugabe, can't have very much to teach America - or anyone else.

Besides, even those Americans who are unenthusiastic about Iraq, and want to see Mr Bush back in Texas clearing brush on his ranch, were offended when the UN provided the platform for Venezuela's Hugo Chávez to rant at Mr Bush, as "the devil" trailing a smell of sulphur. There is a mounting feeling that money spent to support the UN - its reputation already seriously dented by the oil-for-food scandal, its members devoted to embarrassing America and Israel while forgiving Arab nations all their sins - might not be in America's long-term interests.

Perhaps of most significance is a growing realisation in Washington that Nato is past its sell-by date. As America takes mounting casualties in Afghanistan, EU countries, with Britain the notable and honourable exception, refuse to provide significant support for an effort in which they agreed to participate. The handful of German troops are not allowed out of their barracks after dark, and soldiers from other nations patrol the most peaceful regions of that violent country.

Besides, Americans are increasingly aware that Europe is funding its generous welfare states by stinting on military spending, something they can do because they rely on American-funded Nato "assets" such as transport planes. That makes America, stung by its experience in Iraq, more rather than less likely to cut back on its role as world policeman.

Perhaps the best early clue to emerging attitudes towards international organisations was Treasury Secretary Hank Paulson's decision not to attend the recent meeting of G8 foreign ministers. He simply had more important things to do than to sit through sessions that could not possibly have tangible results. Mr Paulson's German counterpart agreed with the Treasury Secretary's priorities, and sent a deputy rather than postpone his own holiday.

Will all those who revile American “arrogance” be all that happy with that outcome? It would, however, be one of history’s supreme ironies that the slow destruction of tranzis will have been started by the arrogant and seemingly completely victorious activity of their greatest promoters.