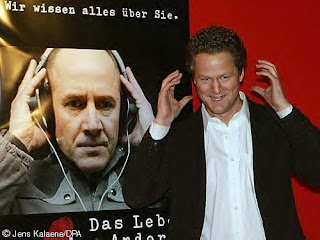 Many of our readers will feel well-merited contempt when I acknowledge a weakness for the Oscars razzmatazz. I am quite looking forward to all those comments on the forum that show how superior the commenters are to me.

The reason is that I like films, though I rarely prefer films of the last thirty years to those that had been made before. Still, one likes to know what is going on in the film world (which is why I am addicted to the Libertas site) and, beside, the Hollywood luvvies are always good for a laugh.

A good deal of attention has been given to the preposterous spectacle of Leonardo di Caprio looking with deep reverence at Al Gore while presenting him with the Oscar for best documentary for “An Inconvenient Truth”. Some of those who wrote about it, including this blog, pointed out that it is highly unlikely that either of them had arrived to the presentation in a horse and buggy. It is much more likely that they and all the other luvvies, who applauded Gore to the skies, had come in large, gas-guzzling limousines, some, including Gore, having flown in on polluting Gulf-Stream jets. (Oh wait, I forget, they have all purchased carbon offsets. Or something.)

There were a few interesting aspects, not least the fact that quite a few of the prizes appeared well deserved. And, of course, we know who won the Best Actress award: our own Dame Helen Mirren, one of the best actresses of her generation, who had appeared in a spectacularly attractive dress and clutching a Union Flag. Her acceptance speech included words of admiration for the Queen, whom she had played in the eponymous film.

A successful British film (a rarity in itself these days), favourable words about Her Majesty and that Union Flag. Dear me. No wonder the film was ignored by the Commissar responsible for the Media, Viviane Reding, even though, as EU Business reports, she was quick to claim a bit of the Oscars glamour, saying that Europe’s film makers continue to “fight hard and with confidence for market success also outside Europe”. But not, of course, the British ones who show the Queen in a good light.

Well, what are these film makers and how is it that Commissar Reding can claim credit for their success?

When it comes down to it, there was only one: the winner of the Best Foreign Language Film award, a young German director, Florian Henckel von Donnersmarck, with his work: “Das Leben der Anderen” (“The Lives of Others”). It was noted that Cate Blanchett seemed utterly stunned when she handed over the prize. This was …. Sshhh …. Whisper who dares …. An anti-Communist film.

The main character is a Stasi officer who begins to understand the wrongness of the system he serves through one of his jobs. Needless to say, Herr von Donnersmarck was asked by the journalists whether it had any relevance to the United States under Bush and replied tactfully. One does wonder about the sheer idiocy of somebody who can ask a question like that.

One also wonders how the Hollywood luvvies took to him thanking “Schwarzenegger for teaching me that the words "I can't" should be stricken from my vocabulary”.

Now, where does Commissar Reding come in? Well, it seems that the film “benefited from the EU's Media programme of support for the European audiovisual industry”. Not, I hasten to add, in its production, which may be why the EU was omitted from the acceptance speech, but some money had been handed over to help with the distribution.

The 500,000 euros (660,000 dollars) of EU funding for the film went not to producing the film, but to help boost its distribution in cinemas and on DVDs outside Germany.

Is that enough to claim kudos for the European Community?

There are two other reasons for the EU claiming that bit of Hollywood glamour. One is that Al Gore’s somewhat hysterical “documentary” drew on some results produced by the EU-funded EPICA environmental project and the other is that “the technical achievement Oscar went to a collaborative project supported by the EU's Marie Curie Research Fellowships”.

Well, the second one is a little more complicated than that.

Dr. Bill Collis, Simon Robinson and Ben Kent from The Foundry, a British visual effects company, together with Dr. Anil Kokaram from Trinity College Dublin and video processing group Sigmedia were honoured with an Oscar for the development and design of editing software known as the Furnace.

The collaboration between the two teams was supported by the EU's Research Framework Programme through its programme of Marie Curie Fellowships.

The Furnace software helps to delete from the screen any actors, wires or other objects which the director would rather not reveal to the viewer.

The software has been used on a range of high profile films including Casino Royale, The Da Vinci Code and The Lord of the Rings trilogy.

What any of this has to do with European film-making or its achievements, is anybody’s guess.