Got it in one 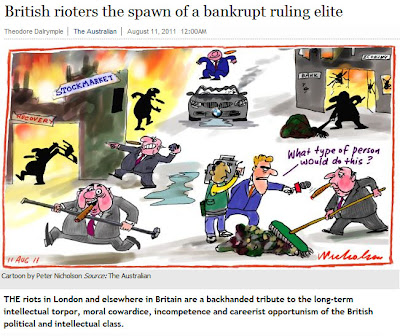 How short is the collective memory of the nation, and how shallow the thinking of the "crowd". A bit of violence from the "underclass", a massive amount of hype from the media, and it's "scumbags" this and "scumbags" that.

The police and the politicians, previously objects of contempt, instantly become the heroes of the hour. Blood lust rises and within days the chatterati and the public combine. They prattle gleefully of putting water cannon on the streets, and of calling in the Army to gun down the rioters. Then the Boy draws drooling admiration from people who should know better.

The corrective from Theodore Dalrymple, therefore, is extremely welcome. "The riots in London and elsewhere in Britain are a backhanded tribute to the long-term intellectual torpor, moral cowardice, incompetence and careerist opportunism of the British political and intellectual class", he writes. His further observations are equally delightful:


Relatively poor as the rioting sector of society is, it nevertheless possesses all the electronic equipment necessary for the prosecution of the main business of life; that is to say, entertainment by popular culture. And what a culture British popular culture is!

Perhaps Amy Winehouse was its finest flower and its truest representative in her militant and ideological vulgarity, her stupid taste, her vile personal conduct and preposterous self-pity.

Her sordid life was a long bath in vomitus, literal and metaphorical, for which the exercise of her very minor talent was no excuse or explanation. Yet not a peep of dissent from our intellectual class was heard after her near canonisation after her death, that class having long had the backbone of a mollusc.

But, as before, we note that there is no recognition of this amongst "the British political and intellectual class", a class that mourned the passing of the gutter press News of the World, describing it as a "fine newspaper".

One only has to look at the preposterous Cameron, pontificating from his lectern placed by his lackeys in front of No. 10, to know that all is not well with the world. "For too long there (has) been a lack of focus on the complete lack of respect shown by these groups of thugs…", says this fool – oblivious to that central fact that respect is not given but earned, and he and his ilk have done nothing at all to earn it.

A leader so lacking in self-awareness, coming up with shallow, frankly stupid nostrums for a problem he does not understand and has been part of the making, is a man who is going to make that problem worse.

And it cannot be said often enough: the British "political and intellectual class" are part of the problem, not the solution. But perhaps the bigger problem is that so many people believe, or allow themselves to believe otherwise.

It seems to me that the people, as well as the politicians, need to do some growing up. Blood lust is not the answer - stop the authoritarian knee-jerk. Politicians are not the answer either - statists, every one of them ... as Raedwald points out. Nor does the media have anything to offer: "Britain is in a bleak mood. Our politicians must offer us a vision of a country remade ...", dribbles the failing Times, representative of a corrupt, self-serving media industry.

What we need is people power, adults ... you know, grown-up people, who take control of their own destinies. As it stands, a nation of shallow-thinking wimps that runs to the politicians every time there is a problem deserves everything it gets - and a lot more besides. You want vision? Go to Specsavers. But if this problem is going to be solved, we will have to do it ourselves.

"There is hope for this country. But we must stop looking upwards for it. The politicians are the ones leading the charge into the gutter", as another blogger writes.  Grow up children - there is a whole world out there, and nanny isn't going to help you.