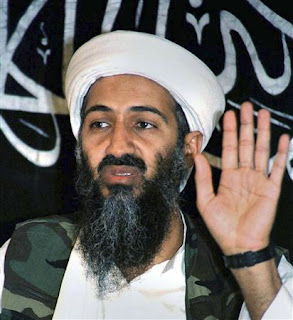 Obama is in trouble, not least after putting out what is widely thought to be a forged birth certificate. And, hey presto! He suddenly announces that Bin Laden is dead, supposedly killed on Sunday in a compound in Pakistan during a raid by US Navy Seals - the day after the anniversary of Hitler's death.

This is by no means the first time Bin Laden has been pronounced dead. Diverse sources have been claiming this for some time. As early as December 2001, the Pakistani president Gen Pervez Musharraf was mooting that he had been killed by American bombardments in his mountain base of Bora Bora.

Famously, Mark Steyn, writing for The Spectator, insisted that Bin Laden was dead and, in September 2002, during an interview, Khalid Sheikh Mohammed, a senior member of al Qaida, mistakenly referred to Bin Laden in the past tense. The reporter Yosri Fouda, London bureau chief for al-Jazeera, concluded that bin Laden is now likely to be dead.

Two months later there was strong speculation from US syndicated columnist, Andy Rooney, that the al Qaeda leader was dead, on the basis of the poor quality of a recent video tape recently released. He was supported by Dale Watson, the FBI's then soon to be retiring counter-terrorism chief. "I personally think he is probably not with us anymore", said Watson.

Come March 2003, Defense Secretary Donald H Rumsfeld was raising the possibility that bin Laden was dead."The reality is that bin Laden is spending a great deal of his time - if he is alive today - hiding and running and trying to communicate and trying to survive", he said.

Then, in one of the more famous episodes, in April 2005, the London-based Arabic daily Asharq Al Awsat announced that Bin Laden was dead. On 2 November 2007, Benazir Bhutto – less than two months before her assassination – claimed in an interview with the BBC's David Frost that Osama bin Laden had been "murdered" (partial transcript here and video below).

In April 2009 the Pakistan president, now Asif Ali Zardari, said Pakistani intelligence believed Bin Laden dead, and in September of the same year, the Daily Mail was asking: "Has Osama Bin Laden been dead for seven years - and are the US and Britain covering it up to continue war on terror?"

Now, so often has Osama Bin Laden been pronounced dead, that when Obama yesterday made his announcement, he was according to this source, at least the ninth major head of state or high-ranking government official to have done so – and that is discounting all the small-fry.

There was no hard evidence for any of these and many more earlier assertions, but a lot of serious people have strongly believed Bin Laden was dead. Now it seems, they were all wrong ... every one of them. Except that, looking at the multiple reports of Obama's current claim, there seems to be a similar lack of confirmation. He has offered no better (or more) evidence to support his claim than any of his antecedents.

Because of the profusion of rumour, claim and counter-claim, the US military has long been used to being treated with scepticism when it comes to its own claims of taking out key terrorists. When announcing successes, therefore, it has developed a routine of offering three types of evidence – photographs of the body, independent witness reports, and DNA identification evidence. A classic example was the death of Abu Musab al-Zarqawi.

Even the revered Spectator dimly understands that the US treatment of the media is now different. It cites the example of Saddam Hussein's sons, Uday and Qusay, when they were killed. Gruesome though they were, the US authorities were quick to release photographs of the pair, to still scepticism amongst Iraqis. But when it comes to Bin Laden's latest death, although Obama claims that the Seals "took custody of his body", we have not so far seen any official photographs. 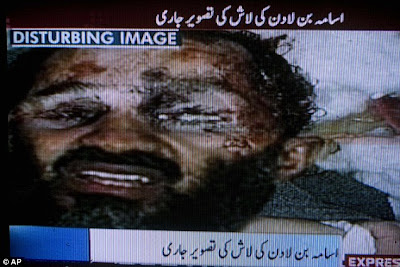 Earlier on, The Daily Mail was claiming a "confirmed kill", showing a screen grab from Pakistan's Express TV, purporting to show bin Laden's "maimed face" (above). A better photograph was dismissed as a photoshop fake, with an illustration of how it was done here. The Guardian confirmed that the picture was a fake that had been circulating on the internet for years. 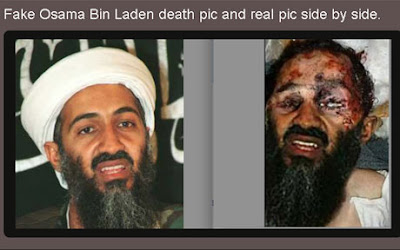 That means that, as yet, we have absolutely no independent evidence to support Obama's claim. There cannot yet be any details from a post mortem examination as it is too early. Some might argue, though, that we also need reliable evidence that excludes any possibility of the body having been preserved. We have, after all, been there before, and there have been those persistent reports of his earlier demise.

However, the Mail promises us that "experts used facial recognition techniques to identify the slain terrorist and performed DNA tests, the results of which will be available in the coming days". WCTV Channel 5 TV is claiming that a DNA match has already been made, giving a 99.9 percent certainty of a positive identification. It was that, we are told, which gave Obama the confidence to make his claim. Interestingly though, just the laboratory procedure takes between 24-72 hours, so it hardly seems as if Obama had enough time.

Such results, if they can be trusted, might provide some evidence that Bin Laden is dead. Photographs on their own may prove of limited value as the use of doubles is not unknown. But there are also the questions of when and where Bin Laden died. These need corroboration.

As for independent tests, we are told that the body has already been buried at sea, "to avoid his grave site becoming a focus as Saddam Hussain's grave has become in Iraq". This means there can be no independent corroboration, which is asking for trouble. It is almost as if the US authorities are going out of their way to invite suspicion.

And to add to the confusion, the Taliban in Pakistan are claiming that their leader is still alive and that reports of his death are baseless. This is according to Karachi-based GEO Television, citing a statement from the group. Are they going to be setting out on a fishing expedition?

Cutting to the chase, all we have - many hours after the news has broken - is an unsupported claim by a tarnished president. The claim may be absolutely true, but at the moment we have no evidence to support it, one way or another. But this should not trouble the media and the clever sophisticates. They are so grand, and wise and knowing that they do not need troublesome things like actual evidence to support their belief systems.

Unlike us simple folk, they, and only they, are clever enough to know that US presidents never lie, have never been mistaken about anything, especially something important ... and have never been involved in botched operations. They would have it that we can safely believe everything we are told. The proof will come later - the sophisticates do not need to wait. They are so clever that they can divine the truth before it even arrives. 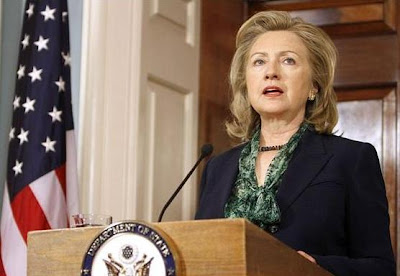 Of course, it adds immeasurably to the corps of evidence that Secretary of State Hillary Rodham Clinton has made a statement regarding the death of Osama bin Laden. When one is a real sophisticate, what more can one possibly need? Well, a Boys' Own narrative from The Guardian helps:


The Americans scoured the house for intelligence, took photos of the body, using facial recognition technology to compare it with pictures. It was him ... Bin Laden's body was taken to the US aircraft carrier Carl Vinson in the Arabian Gulf. Hours later, it was wrapped in white cloth, and – after, it is said, the administration of Islamic burial rites – it was weighted and dropped from a plank into the sea. The location was not revealed.

Three journalists put their name to this, claiming ownership of it. None of them witnessed the events, or have any means of knowing that they, and the other things they wrote about, were true.

In a more cautious age, such material might have been referenced to source, with the writers standing back. But not any more. Tens of thousands of journalists, politicians and commentators blindly recycle exactly the same material, fed to them by the Obama publicity machine. Never mind the quality, feel the width. We the readers can be assured that there is no way the media would be publishing it if it was not 100 percent true.

Now that so many clever, sophisticated people have an investment in their beliefs being true, we cannot possibly permit any doubt. To doubt is to become that most venal of all creatures, a "denier". To avoid that label, you must not ask questions my child. Just shut up and believe. You know it makes sense.

And all too often, ladies and gentlemen, that is how history is made.