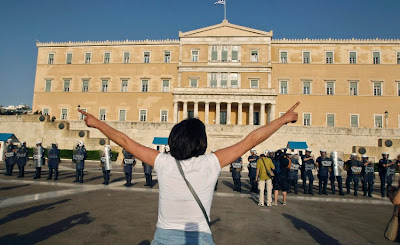 While the UK has been mucking about with its fatuous referendum, and the Septics have been frying their  credibility, the galloping Greeks have been grasping at straws. With their financial situation worse than Argentina on a bad day during their economic crisis, Spiegel Online is telling us that Athens is considering withdrawing from the eurozone.

To meet this threat, we are told that there have been panic meetings between eurozone finance ministers and representatives of the EU commission in Luxembourg at the Château de Senningen, a site used by the Luxembourg government for official meetings.

In addition to Greece's possible exit from the currency union, a speedy restructuring of the country's debt also featured on the agenda, but the meeting was declared "highly confidential", with only the eurozone finance ministers and senior staff members permitted to attend. The outcome has not been revealed.

Sources have told Spiegel that Germany intends to seek to prevent Greece from leaving the euro zone if at all possible, warning that if Athens ditched the single currency, "It would lead to a considerable devaluation of the new (Greek) domestic currency against the euro."

According to German Finance Ministry estimates, the currency could lose as much as 50 percent of its value, leading to a drastic increase in Greek national debt. Greece's national deficit could rise to 200 percent of gross domestic product after such a devaluation. "A debt restructuring would be inevitable," experts warn. Greece would go bankrupt.

Needless to say, as the news has leaked out, Greece has been quick to deny the Spiegel claims, the rapidity and sharpness of the denials suggesting that there many some truth in what has leaked out.

The story is now getting widespread media coverage, with even The Guardian on the case. Its "take" is that the secret talks have been on debt restructuring. This in turn suggests that the Greeks are using the threat of withdrawal as leverage to get a better financial deal from the "colleagues".

With demonstrations almost daily events, so numerous that they are barely reported outside Greece any more, the government is looking down the nose of a long, hot summer where things can only get worse. Its politicians are stuck between a rock and a hard place, while Germany is trying to hold the line, in the knowledge that, if Greece quits the euro, others will not be far behind.

Whatever the truth of this, and no one outside a very tight circle will know, we have not seen the last of this drama – by any means. The underlying stresses are unresolved, and the longer the delay the worse it is going to get.