An air of unreality 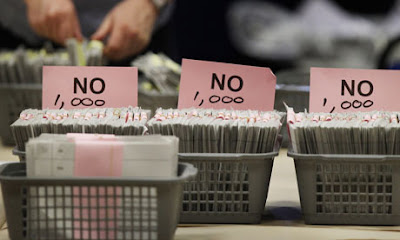 It is all very well sneering and jeering at the predicament of Greece and its debt so large that no one really knows what it is, or would believe the truth if it was properly laid out. But in Britain we have a country which exults in a debt which increased by only £141.1 billion last year (£4.8 billion below forecast) and will still increase by a further £122 billion over the forthcoming year.

Thus, the overall public debt is creeping towards £1 trillion and that figure will very likely be reached during this financial year. The total debt now stands at £903.4 billion and with £122 billion being the Treasury's own forecast the UK is likely to reach that figure in January 2012. The total debt now equals 59.9 percent of GDP, up from 52.8 percent from March 2010.

Such is the enormity of that figure that, in a real world, populated by grown-up people, the focus would be absolute, with a Herculean effort devoted to reducing this colossal burden which is costing more to service than our entire defence budget.

Moreover, there would be some recognition of the fact that we are essentially borrowing to pay interest, without even touching the capital sum. That is a sure recipe for disaster which, for an individual or company, would end up in the bankruptcy courts.

But, instead of focusing on that reality, our politicians have just spent the last month or so considering an entirely unnecessary and unwanted change to the voting system, expending their life energy on fighting a referendum which cost £100 million, or the price of six hours increase in debt, which we can ill-afford.

This is against the background of the public sector whingeing about "cuts", when we are seeing nothing of the sort – only the redistribution of funds to service debt rather than provide services, and the constant drain of funds on mad schemes such as the Libyan intervention, the continuing war in Afghanistan, and the massive aid budget - to say nothing of the stupid excursions into electoral reform.

As an aside, it would be interesting to penetrate briefly into the foetid mind of Mr Clegg to discover the techniques he uses to justify the expenditure of £100 million of our money on his vanity project, when every single penny of that has to come out of the pockets of people, most of whom have considerably less personal wealth than does he.

He should, perhaps remind himself that, in the history of revolutions, politicians have been slaughtered for far less – which is why the man of the people needs a £300,000 armoured limousine and a full-time protection squad.

But if that is the real word, the indomitable Heffer puts us in touch with the inner fantasy which pervades the Westminster bubble. There, the reversal of fortunes of the revolting Clegg is seen in terms of electoral advantage, having the Heffer consider the prospects of the Boy Dave going to the country with an early general election.

With his usual dose of invective, Heffer makes the case, which then falls apart when the egregious commentator falls into the trap of arguing that Dave should be "ruthless", and stand up for the "Conservative interest". The idea of promoting anything "Conservative" is so foreign to the very being of the Dave that one struggles to understand why Heffer should even think of suggesting it.

The Guardian, on the other hand, wants to concern itself with the threat of Scottish devolution, where Salmond's victory in the Scottish assembly brings the Haggis-eaters closer to independence. How much of that is sentiment driven by English immigrants, who are refugees from the three-party Mafia over the border, is anyone's guess. But it is a more significant factor than many would realise. For the cash-strapped English, the idea of not handling over £23 billion to the Scots every year begins to look very attractive. They can have their "independence", and write up their own Brussels laws. We'll keep our money.

That is the name of the game. While Churchill might have offered us nothing but blood, sweat and tears, going on to provide good measure of each, Dave offers us electoral circuses as a distraction from the real business of government – anything to avoid addressing the real issues.

That is what makes life both so very interesting and difficult at the moment. One looks at the hand wavers on the BBC in their broadcast studios, earnestly mouthing words pouring off the autocues and the printed scripts, none of which have any real meaning or depth. There is nothing but an air of unreality – we know it can't last, but there is absolutely no sign that anyone in the bubble is capable of realising that.

The consequences of denial are going to be savage and prolonged, and one really does wonder how long it will be before they become apparent. Our only consolation is that those in the bubble will be the last to know. We can enjoy watching them squirm, as the enormity of their predicaments finally strikes home.