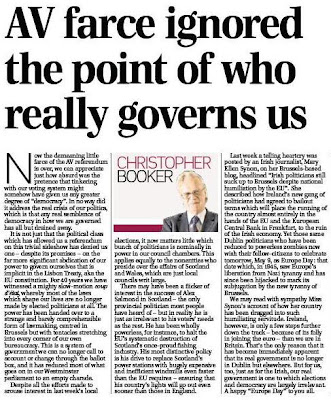 Booker in his column today confronts the "farce of an AV referendum" which ignored the point of who really governs us. The voting system is not the flaw in our "democracy": it's the abdication of our powers to unelected politicians in Brussels, Booker says.

This is not a new theme to readers of EURef, but the sentiment may be new – or newly framed – for a lot of Booker's readers, although it is hard to believe that it will be unfamiliar to his regulars.

Essentially, the pretence that tinkering with our voting system might somehow have given us any greater degree of "democracy" always was absurd was In no way did it address the real crisis of our politics, which is that any real semblance of democracy in how we are governed has all but drained away.

We now have a system of government we can no longer call to account or change through the ballot box, and it has reduced most of what goes on in our Westminster parliament to an empty charade.

But we actually have another problem, one about which we rarely speak, as we continue to be handicapped by the lack of an alternative to the main parties, marked by the continued and now quite spectacular success of UKIP in any elections other than the euros.

In this round of elections, with all three main parties apparently detested by an increasing number of people, UKIP managed to lose one council seat and, despite high expectations, they failed to make a mark in the Welsh Assembly elections, blaming a "strategic error", and managed to pick the wrong side on the AV referendum.

Generally, the small parties did badly, as did independents, which would appear to afford some small excuse, except that not all the small parties did badly, the Greens becoming the largest single force on Brighton and Hove City Council - a year after the city returned the UK's first Green MP – gaining ten 10 councillors. The party now has 23 councillors, while the Conservatives have 18, down from 26, and Labour remains with 13 members.

Clearly, UKIP's tactics must have something to do with their predicament and it was thus interesting to note, before the election, the comments of Raedwald, who listed the party's failings. Amongst these, it was not "intellectual enough" and, in particular, it is too "against" stuff and does not communicate or project a set of positive values he can buy into.

This hooks straight into my own views, where I have more recently argued for a new "ism" and for a long time railed against UKIP's lack of vision.

That latter complaint goes way back, at least ten years, and the single most important blockage, preventing the party developing its intellectual base, its vision and its move towards a new "ism" is the current party leader, Mr Nigel Farage. Over the last decade, he has turned the party into his own personal plaything, dispensing patronage as mood takes him and holding back the party development. Thus, while the Greens prosper, the Farage Party is stuck in the doldrums.

Our liberties and our exit plan, however, are far more important than Mr Farage, and it is not only our mainstream politicians who have abdicated our powers to unelected politicians in Brussels. It looks very much as if he has abdicated his responsibility to create a viable Eurosceptic party. And if he cannot do the job – and clearly he has not so far – he needs to stand aside and make room for someone who can.